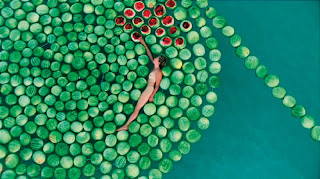 One of my favorite things to do is to go to the thermal baths in Warm Springs, Virginia. The area was sacred to the Indians who regularly soaked in the waters for spiritual and salubrious reasons. For me, it is indeed a spiritual experience floating in the waters: a letting go, a return to the womb, an elemental connection with nature. I always leave feeling refreshed, renewed and on some level, healed.

I had a similar experience watching Sigalit Landau’s hypnotic DeadSee which is part of the exhibition The Nameless Hour: Places of Reverie, Paths of Reflection at VCU’s Anderson Gallery. It has all the characteristics of a good art video, beautiful to look at and curious with an element of suspense, qualities that draw you in, making it impossible to look away. Landau is Israeli and uses the Dead Sea with its historical significance and high saline content repeatedly in her work. DeadSee begins with the camera hovering over watermelons bobbing in water. As it pulls back, we see they are strung together forming a ball. Most are intact but a few have been cut to expose their red flesh. As the camera continues moving away we see the artist, nude and floating within the ball which is slowly uncoiling, the long line of watermelons, like a string of pearls moving off to the right. More than anything it looks strangely molecular. It’s so odd and mysterious and visually appealing, one is riveted. We want to see what happens to Landau’s body when her section uncoils, what the bits of red from the cut watermelons will look like as they move in the green line across the screen, most of all we just want to make sense of it, if only in a nebulous, metaphorical way. Nothing all that surprising happens and yet the whole thing is a surprise.

There is a second Landau video in the show. In it she stands on a watermelon floating in the Dead Sea. Shot underwater and looking up, the top quarter of the video is a fish eye view of the alien world above, a blurry swirl of bright sunlight, blue sky and movement. Below, one senses the quiet and calm and the eternal constancy of the turquoise depths of that storied body of water. Landau had a major installation at MoMA a few years back. I am sorry I missed it; it won’t happen again.

My visual water cure continued with Janine Antoni’s life size video Touch in which she crosses a tightrope set up on a beach. As she steps on the rope it aligns briefly with the horizon and her feet appear to be stepping directly on the ocean. It’s a nice metaphor for an island girl (Antoni grew up in the Bahamas) whose existence would have spanned sea and land and for whom the horizon would have represented (for better or worse) the larger world. When Antoni steps out of the field of vision, the rope hovers there and then fades away so that we see a pristine view of the ocean. It happened so subtly, at first I thought I’d imagined it.

I first became aware of Pipilotti Rist years ago when the video of herself walking along a street gaily smashing car windows with a red hot poker went viral, or as viral as things did back in 2000. Gravity, Be my Friend her installation here is simply extraordinary. One is directed to enter the room, remove one’s shoes and sit (I ended up lying down) on an amoeba shaped pile of carpet layered in such a way to recall a topographical map. The aesthetic is decidedly groovy ‘70s. On the ceiling, within a mirror image amoeba shaped frame, an ecstatic (and downright trippy) video of figures frolicking in water, amidst flowers and weeds is projected. It’s a kaleidoscope of color and images. Joyful, fresh and just plain fun. A cool soundtrack adds aural balance to this visual feast. I really could have spent the entire afternoon there.

Stephen Cartwright’s work explores landscapes that have been altered by man. Fort Peck recreates the topography of a valley flooded to form a reservoir. A graceful hanging sculpture of translucent laser cut plastic suspended by fine wire, it’s hung at waist height so that you look down on it. The piece steps beyond its footprint, casting filmy shadows about the room.

To create his immersive soundscapes, The Sound of the Red Earth and Water Stephen Vitiello made extensive recordings in the Australian Outback. For this installation, he collaborated with Jeremy Choate using neon tubes of light to complement the sounds. I love me some neon and standing within the glowing light with the sounds washing over me was intense.

So I left the gallery after being taken on various journeys by different artists. They took me places I didn’t expect and provided me with an hour of reverie and reflection that left me inspired, uplifted and renewed.

Posted by Sarah Sargent at 2:50 AM