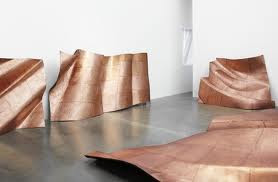 The New Museum’s second Triennial, “The Ungovernables,” a saucy comeback to the Whitney Biennial, is a smaller show, consisting of thirty-four, mostly non-Western, artists and collaborative groups.


The Trainee (2008) by Finish artist, Pilvi Takala, is a mixed-media installation that documents the month-long job Takala held with a global financial company. During her tenure, Takala, intentionally exhibited increasingly abnormal behavior: sitting at her desk staring straight ahead for hours, spending a day in the company’s tax library not doing any work, and for the entire span of another day, riding up and down in the elevator. In addition to everything else, you have to admire Takala’s ability to maintain the ruse in the face of what must have been pretty uncomfortable circumstances dealing with co-workers and superiors perplexed and even angered by her odd behavior.


Though there’s a whiff of Candid Camera about the whole thing, the work speaks to the soul-crushing corporate environment, while also taking a swipe at the asleep-at the-wheel practices that have governed big financial firms, allowing for the kind of mismanagement that led to the recent global economic crisis.

Takala’s installation includes the company’s welcome letter, and a card key, workstation and computer. She even includes voicemails and emails from co-workers and bosses that discuss Takala’s conduct.

Hassan Khan’s compelling video, Jewel (2010) features two men dancing to hypnotic Middle Eastern music composed by Khan. The dancing treads a fine line between belligerence and eroticism. Adding to the tension, the men and the clothes they wear suggests different social classes. There’s something primal and out of control about their interaction; they seem ready to explode and you don’t know in which direction they will go.


Cinthia Marcelle and Tiago Mata Machadovideo’s 2011 video, O Século (The Century) opens with an aerial view of an empty street. It’s unremarkable, empty and quiet. All of a sudden, objects begin being hurled into the street from the right of the picture: chairs, oil drums, tires, crates, bicycle wheels, and lots of fluorescent light bulbs, all making satisfying crashes when they hit the pavement. After 5 minutes in which the ferocity of the barrage waxes then wanes, the video returns to an empty street and the whole thing starts again, only this time the objects come from the left. I’m not sure what it’s about, but I enjoyed watching it, especially the fluorescents that hit the ground with a pouf and a pop.


Material for a sculpture commemorating the life of a soldier who died defending his nation against intruding enemies (2012) by Iman Issa features an assortment of colored geometric objects on a plinth. With their distinct shape and placement, the objects suggest there’s some sort of symbolism attached to them. I liked the cleanness of the lines, the purity of the colors and how the dispassionate quality of the physical objects jarred with the title. It speaks to the impersonality, inevitability and futility of war.


Rita Ponce de Leon’s 2011 installation of 120 tiny, beautifully executed India ink drawings in a table-top installation, Acepto que nada es mio (I accept that nothing is mine) toyed with scale and obsessiveness.


Eavesdropping (Version # 2, large), Amalia Pica’s 2011 installation, presents an array of different sized colored glasses placed against a wall, at the ready for listening in to next-door neighbors. The lusciousness of the vividly colored glass is visually appealing and in these times where our privacy is threatened by high tech devices, its reference to this low-tech spying approach is darkly amusing.


When I first saw Danh Vo’s We the People (2011) I took it for a series of purely abstract copper sculptures, possibly inspired by or evoking water or wind. But, it turns out they’re fragments—parts of the drapery—of a full-size replica of the Statue of Liberty that Danh is working on. Danh has broken the icon, and in pieces, not only has the sculpture become abstracted, but so too the ideals for which it stands. Danh has taken pains to exactly reproducing the thin copper skin. Looking at it, it seems impossibly fragile. In the original statue, the interior feature’s supporting scaffolding makes this fragile skin strong enough to stand and endure—a fitting metaphor for our democracy.


Finally, it was a delight to see Lynette Yiadom Boakye paintings (paintings are rare sights at this kind of show). Boakye compositions feature figures, generally one of two against stark backgrounds. Applying the paint liberally with forceful brushstrokes, Boakye uses color sparingly, but to great effect. I loved her surfaces and the way she conveys so much physical and psychological information with relatively little.


I haven’t been able to put my finger on why the downtown show seemed somehow better when compared to the Biennial. In terms of quality, the work was pretty evenly distributed between the two. In looking back, I wonder if this had something to do with the way the work was displayed in gallery spaces—the New Museum airy spaces are very appealing (so long as you’re not too close to the elevator and its annoying dinging bell), well-suited for displaying contemporary art. I hope this isn’t the case, as I love the Whitney and am sad that the museum is pulling up stakes and leaving its Breuer-designed home. If it is the case, it seems misguided as its collection includes more than just contemporary art. I hope the Whitney doesn’t go down the road MoMA took in their rush to reinvent themselves to “stay relevant,” and sacrifice the intimacy of their spaces.


“The Ungovernables” says it all. It’s a wonderful title, funny and subversive and youthful. It tells you right away that it’s not taking itself too seriously. By contrast, the Whitney Biennial has become so fraught with expectation (for both bad and good), and it’s also just gotten so unwieldy that it seems heavily weighed down with gravitas.

Posted by Sarah Sargent at 12:12 AM No comments: