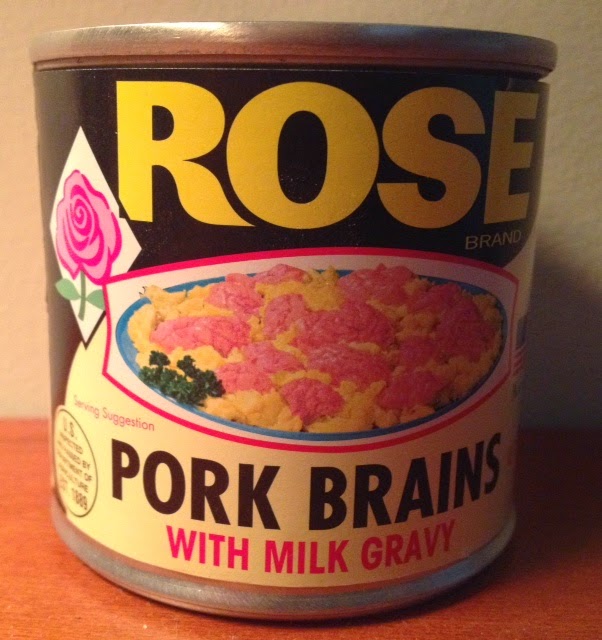 What can I say? I love this little can for so many reasons.

First of all as if the pork brains weren’t bad enough on their own, here they're served with milk gravy.

You probably think I’m crazy, but once you move beyond the grossness, there’s something so poignant about this foodstuff. I think this is because, for me, it harks back to a time before fast food and cultural homogenization when country people ate a snout-to-tail diet not because it was hip, but because it was thrifty.

The can’s design is pretty nifty: pale (milk gravy colored?) yellow and black with bold writing. (These people are proud of their product!) Then there’s the name. If you were going to pick something that was the antithesis of pig brains with milk gravy, a rose is a pretty good choice. So you name it Rose and for good measure you slap a big pink rose on the can—quite literally putting lipstick on a pig.

Beneath the name a picture depicts the preferred way of serving them: chunks of pink brains liberally arranged on a plate of scrambled eggs (oy) garnished with a genteel sprig of parsley.

Rose Pork Brains with Milk Gravy only seems to come in a 5 oz. can because, quite frankly, that’s plenty. The can has a pull top so when the urge for some pork brains strikes, you don’t have to  waste any time hunting around for the can opener. Just pop the lid and voila!