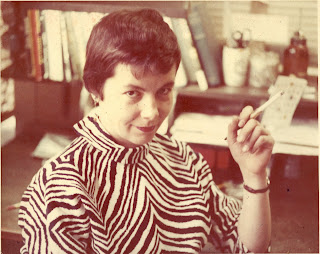 My mother’s younger sister, Dorothy Chilcott Jackson, lived in New York in the 1950s and early 60s working for one of the photography journals and running with the poets, writers and artists who populated Greenwich Village at the time. I don’t know much about that aspect of her life, having been born in 1957. She didn’t talk about it, but it was an important facet of her character.

When I was little I called her Aunt Dottie. At about 13 she insisted I switch to “DJ,” her initials, which is what my older siblings called her. She loathed the dotty-sounding Dottie. I was thrilled at this upgrade. To me, DJ sounded cool, and it made me feel very grown up calling her that.

DJ was wonderful. She was funny and fun to be with. She possessed a quick wit and zest for life; I loved being around her. Everyone did. In addition to being my aunt, DJ was also my godmother. I always felt we had a special bond on account of this. But one of the great things about DJ was she was able to convey this to me without diminishing her love for her other nieces and nephews. I’m sure each and every one of them felt they had a special relationship with her too.

I realized much later in life, that DJ was a lesbian. It was never an issue—even for my very prim and proper grandmother who may have been less naïve than one might think. But it’s very possible, she and the other adults in the family were in denial. But to us kids, it read like acceptance and lack of interference. I think this explains how tolerant my siblings and I have always been towards homosexuality. We saw it from the inside and it looked completely unremarkable and normal.

DJ had had boyfriends in New York when she was a gamine twenty-something, but from my earliest memories, Jane was there. DJ preferred jeans and kept her hair cut short, she wore dresses and lipstick, heels and jewelry when situations called for them, but she was a lifelong tomboy and did things men (back then at least) did: sailing solo, fishing, constructing things. I don’t believe she ever hunted; she was a gentle soul and most likely it wouldn’t have appealed to her, but I’m sure that like her grandfather Chilcott, she would have been a crack shot. She loved physical activity, especially downhill skiing. She liked fast cars, Labrador Retrievers, Maine Coon cats and most especially, young people for whom she had a special affinity.

DJ was an astute writer, terrific photographer, talented graphic designer and an excellent and adventurous cook. Together with Jane, DJ had an architectural graphics business. Every year, they’d send out the most imaginative and visually stunning Christmas cards they’d designed. These bold and stylish cards shared a similar aesthetic to the ones carried by the Museum of Modern Art.

DJ had natural élan and superb taste in both her environment and clothes—a trait she and her sisters inherited from their mother. She was independent, self-sufficient, humble and brave, building her charming cabin in Vermont herself. It was a simple, yet handsome structure, vaguely Scandinavian.

DJ was a consummate New Englander. She knew how to live off the land, digging for clams, fishing for flounder and picking berries in her beloved Maine. She would take us kids along on foraging adventures on foot and in boats, teaching us these skills. Some of my favorite memories center around her wonderful shack in Birch Harbor on that rugged part of the Maine Coast. Others are from Silvermine, Connecticut in her cozy house that always smelled like wood smoke, where we celebrated the most wonderful Thanksgivings and I played office in her home office and swung in the exhilarating hilltop swing. Later in more palatial New Canaan, I twirled around in her aqua Arne Jacobson egg chair by the slate hearth.

That house was a child’s dream, boasting a beautiful grotto-like indoor pool complete with a dressing room covered entirely (floor, walls, ceiling) in bright orange carpeting. I spent many hours playing with the Labs in that pool. Later fed and bathed, I’d lie on DJ and Jane’s bed with them and the dogs and watch movies on TV. I remember seeing the original Invasion of the Body Snatchers with them.

I was a cheerful, helpful and appreciative child, but I’m sure the mess I made playing in the office and the spinning of the fancy chair must have grated, but never once did DJ chastise me. She didn’t interfere, letting me carry on being a child doing childish things. She created this loving atmosphere of non-judgment and acceptance which was so nurturing to a young person.

After the devastating break up with Jane, things got tough for DJ. Strapped financially, she worked for a time in a sardine factory near her shack in Maine. She looked at it as an adventure, making friends with the locals whom she charmed and perfecting her already spot on Down East accent.

A dyed in the wool Liberal, DJ suffered through Nixon and Reagan and Vietnam. She would deride them with gusto. I remember her dislike of certain jargon—in particular, she hated “the bottom line,” for instance. I think about it now and realize how prescient she was because isn’t the bottom line at the root of vulture capitalism?

Since her death in 1984, I’ve wondered so many times what she would have thought of events and people she never knew. There have been so many choice examples that I would have loved sharing with her —what she would have made of all that’s happened, I can only wonder and regret not knowing. But I see so well her delight with the good that has transpired (the end of apartheid, Obama, marriage equality), I feel her absent comfort during the hard times (9/11, the deaths of my parents) and hear her scorn expressed through a wicked sense of humor about the appalling characters that populate the political stage.

DJ died at just 58. She’d been ill with cancer for several years and I believe she eventually gave up fighting. In spite of her outward appearance of strength, inside, she was a fragile soul. She was crushed by Jane’s betrayal and struggled for years thereafter. She did eventually find another partner, but it wasn’t the same. It is one of the great sadnesses of my life that she hasn’t been there.

Posted by Sarah Sargent at 8:51 AM