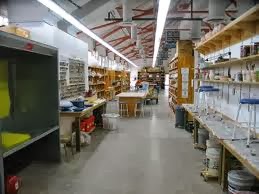 “There’s a synergistic effect when you put artists together in an environment like this.” John Mason, President/CEO is speaking about the Workhouse Arts Center in Lorton, Virginia. The Workhouse resembles nothing so much as a college campus—it’s U-shaped layout looks markedly like Jefferson’s Academical Village—with handsome Colonial Revival buildings designed by Snowdon Ashford. Like many institutions of higher learning, its architecture seems to engender a sense of working toward a higher goal. The arts center, which opened its doors in 2008, surely boasts one of the most unusual back-stories for it began its existence as a prison.

The objectives behind the Workhouse prison were lofty: to “rehabilitate and reform prisoners through fresh air, good food, honest work and fair treatment.” A self-sufficient work camp comprising a massive agricultural complex, the property would eventually expand to over 3200 acres with facilities for women and minors added. The original prisoners were nonviolent people, arrested for petty crimes; most suffered from alcoholism. In fact, when alcoholism became decriminalized in 1966, the prison immediately became obsolete as most of its inmates were released.

One of the darker chapters in the Lorton Workhouse’s history was the imprisonment of 72 suffragettes (including Lucy Burns one of the movement’s founders) held between July and November 1917 following voting rights protests. These were well-educated and genteel women who were treated very badly. An example of one of the rubber hoses used to force feed them (through the nose) is on exhibit in the small, but very interesting onsite prison museum. Vietnam anti-war protesters were also held at the Workhouse.
After the alcohol treatment facility closed in 1983 the medium security Lorton Correctional Facility took up residence in the Workhouse. Fences and guard towers were added at this time, ironically turning the place into what it had been built to overcome. In the ensuing years it years it developed a terrible reputation and was eventually closed in 2001.

In 2002, Fairfax County purchased the former correctional facility comprising a little over 2300 acres for $4.2 million. Thereafter, the Lorton Arts Foundation presented its plan to transform a 55-acre portion of the complex into an arts center. The Fairfax County Board of Supervisors approved the plan in 2004 creating the Workhouse Arts Center.

Turning a dilapidated prison into a spanking new arts center does not come cheap. Two tranches of bonds obtained through the county’s economic development authority totaling $53 million supported the renovations, which entailed an entirely new infrastructure. Rents from the artist studios and commission on the art produced there, class fees, rentals on the theater/event space provide the basis to cover both operating expenses and the bond debt. Additional revenue comes from Fairfax County, which has provided a significant grant, and private donors.

The Workhouse Arts Center focuses on three major areas: visual arts, performing arts and arts education. With approximately 70 visual artists (who must be juried into the arts center) occupying studio space spread out among seven buildings. All seems quiet the rainy Tuesday I visited, but on entering one building I discovered textile artists hard at work and in the hot shop on the other side of the quad two young fellows blowing glass. I catch up with sculptor Megan Peritore who uses photography (as source material and inspiration), neutral toned polymer clay and natural found objects like driftwood, antlers, and bones to create her mixed media sculptures. For Peritore, who joined the Workhouse in 2012, “the major benefit of being at the Workhouse is that I have stepped out of the isolation of my home-based studio and joined a dynamic artists' community where I can stretch my own creative explorations as well as participate in encouraging other artists' journeys. I now spend more hours in the studio working without distraction on my art.”

The studio buildings were originally open-bay dormitories—with the exception of ones used for punishment, there were no cells at the Workhouse until the 1960s. They have been renovated with great finesse, the original structure’s integrity is maintained but the space has been divided up into appealing, bright units with brick walls painted white and clerestory windows providing natural light. Studios are open to visitors Wednesday through Sunday providing a wonderful opportunity to engage with artists. You might think this would be disruptive, but Peritore welcomes it: “An important aspect of being an artist is being able to talk about your work. I have experienced a growing ease in speaking about my art and enjoy chatting with genuinely interested visitors. I also find that I am becoming more comfortable working while engaging with people. Sometimes this turns into an ad hoc demonstration.”

Each studio complex contains a small gallery/shop and classrooms. There are two additional large galleries used for monthly exhibitions housed in the main building along with a café and gift shop.

In addition to theater, the Workhouse has a film series and offers musical and dance performances. While the current theater seats 100, a larger 300-seat facility is being constructed and when funding allows, work will continue on the massive mess hall, turning it into a multi-use event space containing performance areas. Currently the Workhouse Arts Center offers 150 classes serving an impressive 5,000 students and is negotiating with George Mason University and Northern Virginia Community College about their students taking classes at the Workhouse. This has particular appeal in the area of ceramics and glassblowing as the Workhouse has state-of-the-art equipment including kilns, and hot shop.

In the works are a 1000-seat amphitheater, restaurants, apartments, music barn and a garden/horticultural area. When everything’s completed, the Workhouse Arts Center will consist of 234,000 square feet of renovated structures and 60,000 square feet in new construction with 40 acres of open space.

Mason is justifiably proud of what has been accomplished at the Workhouse: “To have gone from zero to operating numerous programs across the range of arts in just four years is pretty amazing.” It’s a wonderful transformation: taking a place that was conceived of with the best of intentions, but which lost its way and putting it back on the right path. Now it’s an organization that’s crucial to the cultural life of Fairfax County. And once again, the Workhouse is providing a peaceful and positive environment both for those who labor there and for those who visit.