Goodbye to All That? 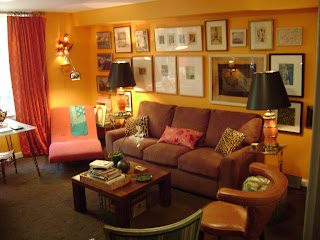 I recently moved. It was a big one, moving not just my belongings but also disassembling my mother’s house and dividing everything up amongst me and my siblings—so lots of work and emotionally draining, for it seems as if we were closing the book on my parents' lives.

I have put most of my things in storage with the exception of my paintings, which are now arrayed around the apartment (on the floor leaning against the walls) that I am temporarily calling home. Much as I love my things, I am also loving the idea of being divested of them and am seriously toying (is that an oxymoron?) with opening a pop-up store and selling them all off. Things, especially nice ones are a huge responsibility and the thought of carting them all around after me is exhausting right now. Maybe I’ll feel differently after some time has passed...

I have always lived in rather funky places and decorated accordingly. I sometimes wonder if given my druthers I might prefer a more minimalist approach, but then I think of who I am how I dress, think, interact with the world and see that my multi-layered pastiche of objects and styles is very much a reflection of that.

Posted by Sarah Sargent at 7:52 AM No comments: 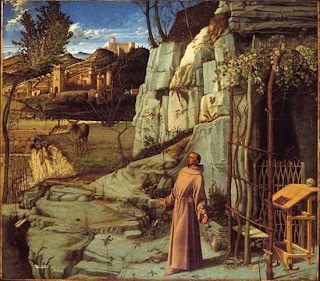 At breakfast today my friend was telling me about a story he’d heard on NPR while I was away about the evacuation plans for selected artwork from the National Gallery in the event of a terrorist attack. After the passing jolt of fear the news of the existence of such codified plans generates, we decided wouldn’t it be great to get one’s hands on the list of the art that made the cut? Fat chance. Though it would make a great walking tour of the museum’s collection, for many reasons I’m sure this won’t be made public. Interestingly, after 9/11 I was going through all the treasures in New York and wondering what I would take in an emergency. Of course, not being the National Gallery my sights were smaller, and I had it narrowed down to just one using the burning building model.

People who know me as a Modernist (and atheist) might be surprised by the choice, for I picked Bellini’s St. Francis of Assisi in the Desert at the Frick, which depicts St. Francis receiving the stigmata. In the painting St. Francis is standing on a rocky ledge outside his cave, a hapless donkey and blue heron, his only companions. I love the few, quotidian details Bellini inserts here and there, the little wooden gutter jutting out from the rock, St Francis’s clodhoppers kicked off under the lectern, the wonderful twig gate leading into his lair. They root the scene in the real world, and for the modern viewer they are delightful period touches. And of course there is the memento mori skull to remind us where we're headed.

Looking carefully you can see a thin line of gold representing the Holy Spirit passing down from the heavens to his hands. St. Francis seems to be knocked back from the impact. The rocks that form the cave take up most of the background creating a large grayish dun colored expanse and a strong diagonal upwards thrust. In the left corner one can see the distinctively Italian countryside and the towers and fortification of a hill town rising up to the cloud-flecked sky. The overall palette of tawny golds, beiges and greens is the perfect foil for that patch of glorious Bellini celestial blue that hovers above and which fills me with such a sense of exhilaration.

It seems to me the painting says so much about beauty and about goodness and integrity. Though unreligious, I do admire St. Francis and what he stood for (the sweet donkey references this) and I admire his spiritual quest, so artfully depicted here, which to me is about courage and independence and an ultimate belief in oneself. So for its beauty, spirit and humanity there’s no question that I’d grab St. Francis of Assisi in the Desert before the conflagration.