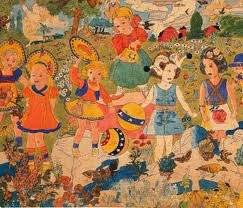 The phenomenal Darger has inspired visual artists and musicians since he first became known, most notably in a 1997 show at the American Museum of Folk Art. A reclusive soul who died in 1973 at the age of 81, during the course of his lifetime Darger produced over 30,000 pages of text and 150 double-sided, large-scale watercolors. His masterpiece, The Story of the Vivian Girls, in what is Known as the Realms of the Unreal, of the Glandeco-Angelinnian War Storm Caused by the Child Slave Rebellion, chronicles the adventures of the seven Vivian Girls on their crusade to emancipate enslaved children.

Beyond intense; Darger’s work sings with such fierce energy it’s the visual equivalent of speaking in tongues. Completely self-taught, Darger’s draughtsmanship is often crude, which only enhances the raw power of his pure, unselfconscious expressions. Darger’s compositional sense and use of pattern and color is dazzling. Using an antiquated style and elements: images from old coloring books and magazine ads that he traced, storybook landscapes and wild, art deco flowers painted with childlike exuberance, Darger creates a singular style that is both grounded in folk art traditions and yet, is so very forward that he leaves others in the dust.

It’s perhaps unfair to compare art created out of utter desperation by a tortured soul with the calculated aesthetic statements produced by sophisticated, aware artists. Talented though they may be, they’re, in essence, just going through the motions, whereas Darger’s work is more than just art; the alternate pictorial world he fashioned was his salvation, his obsession and his reality. No wonder he was so prolific; each night when he returned from his daily slog of menial hospital chores, he could pick up where he left off, escaping into the salve of the Vivian Girls’ company as they battled the evil forces of the Glandelinian Overlords (stand-ins for the abusive institutional staff who peopled his childhood) and so confront and vanquish his demons.

Much has been made of the Vivian Girls’ male genitalia. For Grayson Perry the heterosexual cross-dressing British ceramicist this was a major hook (his alter ego, Claire’s predilection for baby doll dresses and mary-janes suggests that his fashion muses are the Vivian Girls). But Darger was such an innocent and lived in veritable isolation, first with his father after his mother died and his baby sister—the original Vivian Girl—was put up for adoption, then in a home for feeble-minded boys and finally alone in his apartment, it is quite possible he didn’t know the difference between male and female anatomy. Alternatively, he could quite possibly have been a hermaphrodite.

The show is made up of artists directly inspired by Darger and those whose work is similar to his in some way. Justine Kurland’s lush photographs of girls in orchards and meadows parallel Darger’s “armies” of girls and convey a similar blend of beauty and threat. Perry’s sizeable urns specifically reference Darger and feature an interesting overlapping patchwork effect that echoes Darger’s multilayered pictures. Anthony Goicolea’s rather tedious videos, like Kurland’s are in the spirit of Darger with their packs of boys in red hoodies performing arcane rites. His photographs, where he casts himself repeatedly as the different figures, are more interesting. He uses Photoshop to manipulate and multiply images much as Darger used photographic reproduction to enlarge/reduce the cut-outs he employed.

Like Darger, Robyn O’Neil is obsessed with weather and her rather ominous monochromatic landscapes are populated by her own anodyne version of the Vivian Girls, men in track suits. Trenton Doyle Hancock’s, eye-popping mixed media pieces, which recall acid poster art of the 70s, feature imaginary worlds where strange half-animal, half-plant beings do battle with malevolent creatures called Vegans.

Amy Cutler’s striking paintings share with Darger, bizarre iconography and storylines. She depicts women and girls involved in various enigmatic rituals. Hair plays a big role. In one, the figures are attached to each other by long plaits that grow out of two heads at once. In another, four girls pull a house through the snow by their braids that are wound around the porch columns and disappear into the house. Through a window one can see the braids unwinding from great spools situated in an upstairs room. Cutler uses casein paint to great effect to turn down the volume, producing dull, washed-out color and a flattened depth of field. It’s an important effect, tempering subject matter that is so strange, it’s already plenty overt and needs no over-the-top painterly pyrotechnics.

Yun-Fei Ji mixes traditional Chinese painting with contemporary references. His flat, narrative style is most like Darger’s, but also quite different sharing many more similarities with Song dynasty painting. Ji states that seeing Darger’s work gave him license to continue to paint in a traditional descriptive way at a time when this was considered unhip.

I’m sorry Matthew Barney wasn’t included in the show. He and Darger share fully realized, complex mythologies and Barney’s flamboyant imagination’s on a par with Darger’s. Most important though, is that Barney’s work has the artistic muscle to more than hold its own. Darger’s rams-headed Blengins initially conjured up Barney, reminding me of his weird goat-men, but as I thought of his epic videos, with their baroque and often baffling storylines (and their very scope), the connection to Darger’s seemed obvious. But there is a difference between “outside” and out there. At the end of the day, one can’t ignore the fundamental authenticity of Darger’s work; it sets him in a class by himself. He is an inspiration. Having been dealt a bad hand in life, he created his own ameliorated version on his terms. The results are spellbinding.