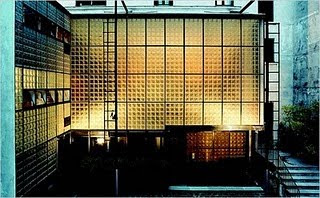 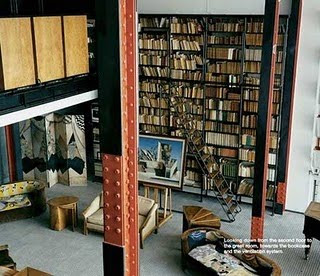 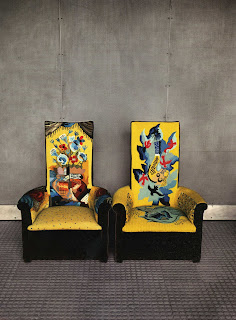 Pierre Chareau’s Maison de Verre is a revelation. A ‘High Tech” design, completed in 1932, decades before such a term was coined, the house was built for Annie Dalsace and her husband, Jean. The Dalsaces were close friends and patrons of Chareau’s and he built for them an abode perfectly tailored to their interests, habits and demands.

In reality, construction of the house was a collaboration between Chareau and Dutch architect, Bernard Bijvoët, although it is Chareau’s vision behind the innovative design. The house, which took four years to complete, was built on the site of (and partially under) an 18th century hôtel particulier on the rue Saint Guillaume on Paris's Left Bank. The original building, which was enclosed on all sides and included a forecourt and rear garden was purchased by Mme Dalsace’s father in 1928 with the intention of tearing it down and replacing it with an entirely new structure. But the building also contained an elderly, legally protected tenant on the top floor. So the plan of razing the structure and starting anew was scratched. Instead Chareau and Bijvoët embarked on a highly unusual approach. They placed steel supports under the top floor apartment, demolished the building underneath, and inserted the new house in the void. The Maison de Verre took four years to complete.

The new house, encased in a translucent skin of glass block, contains three levels: Dr. Dalsace’s office on the first floor, the living area with a dramatic grand salon on the second and sleeping quarters on the third. The glass blocks allow for diffused light to fill the house with select expanses of clear glazing that provide views of the garden. The effect is clean and spare, evoking the astringent beauty of Japanese design. At night the house glows and seems disembodied, hovering ethereally above the courtyard.

The aesthetic of the Maison de Verre is decidedly industrial. There are exposed steel beams, perforated metal sheeting, industrial light fixtures. A "well oiled machine," the house boasts numerous mechanical elements: sliding, folding or rotating screens in glass or metal that define and make adaptable the internal space, an overhead trolley dumb waiter running from kitchen to dining room, a retractable stair from the blue salon to Mme Dalsace's bedroom and a weight activated lighting system in the floor of Dr. Dalsace’s telephone booth. The Mason de Verre is an homage to function, but also to industrial form: Perelli rubber floor tiles—their circular blisters, intended to cushion feet on factory floors nicely echo the circular motif found in the ubiquitous glass blocks—are used on the stairs and in the grand salon. (Silly me, before seeing the Maison de Verre, I thought the use of this particular industrial flooring was a specifically 1980s innovation).

It turns out Chareau was an admirer of Cubism (the subject of my Master’s thesis). He amassed quite an impressive collection of “horrible paintings” (as some of his friends were wont to call them) by Picasso, Braque and Gris. They proved to be his salvation from financial ruin when he sold them in the late ‘30s. What interested me was to note the style’s unmistakable influence on his work. His layering of planes and textures seems so distinctly Cubist to me. I see it at the Grand Hotel in Tours, in the folding fan screens and the tessellating designs he used in fabric, mosaic tile and wall treatments; and it’s also prevalent in many of his table and desk designs, which feature dramatic Cubist-like shelving options.

At the Maison de Verre, Chareau explores all aspects of the Cubist aesthetic. I have not seen the house in person and perhaps the effect is more pronounced when looking at photographs, which are two-dimensional. But I was stuck, for what I took to be, Chareau’s constant toying with spatial perception. In the grand salon the vertical steel beams and the horizontal staircase treads slash across the space, calling into question our sense of it. In certain directions we’re not sure which way things are heading. Are they coming towards us, or moving away; this concurrent sense of depth, flatness and protuberance apes the spatial dynamism of Analytic Cubism. Textural layering of different elements—the Jean Lurçat needlepoint, enormous wall of books, and paintings—all set against the industrial backdrop is a complex Cubist collage, and Lurçat’s designs themselves (of which I’m sure Chareau had some hand in) with their bright colors, overlapping abstract and representational shapes and sprinkled with Pointillist confetti are Synthetic Cubist confections.

While I love the Lurçat tapestries that cover the chairs and sofa, I’m not completely swayed by Chareau’s furniture designs. He did produce interesting tables, desks and lighting, but with the exception of his folding garden version, I find his chairs clunky and uncomfortable-looking. They’re heavy on the art deco and too closely aligned with what you’d see in some proper bourgeois home. While Chareau’s architecture is audacious, when it came to furniture, it’s as if he couldn’t quite let go of his preconceived ideas about what constitutes acceptable design.

Chareau's architectural output was fairly small, but after he moved to the States during WWII, he designed a house-studio for Robert Motherwell in East Hampton. This structure really speaks to me as Chareau incorporated a Quonset hut into the design. I have always harbored notions about living in a Quonset hut—I know, I know: freezing in the winter, broiling in the summer. How about as a summer retreat situated on a northern lake somewhere? I love the simplicity of design and quasi-mobility. The graceful arching shape is reminiscent of the asphalt plant hard by Carl Schurz Park in New York, which Khrushchev famously admired when he visited New York. (The lowly industrial structure was the only building he admired, so the story goes, and I have to say Khrushchev was onto something.)

A masterpiece of Modernism, the Maison de Verre is unquestionably a bold design. Though constructed from “cold” industrial materials, there’s a definite warmth about the house. To a large degree this has to do with the appointments that create an inviting and gemütlich atmosphere. But the architectural design is the soul of the house and it imparts an irrefutable sense of harmony and joy. Three generations of Dalsaces ended up happily living there, a testament to its comfort, allure and staying power. Lovingly restored bt its current owner AMerican , Robert Rubin, the Maison de Verre is open for limited tours.

Posted by Sarah Sargent at 9:33 AM