Collecting on a Dime... 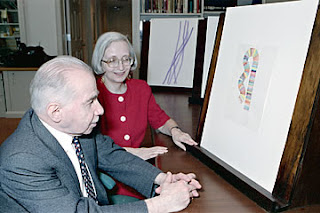 so to speak. That’s what the Vogels did. They were hoarders in a way. But instead of a snarl of clothes, broken-down household items, out-grown toys and cast-off fast food containers, the Vogels hoarded art. Beginning in the 1960s the Vogels acquired over 4,000 works (paintings, drawings, sculptures) by mostly Minimalist and Conceptual artists ( Sol LeWit, Donald Judd, Richard Tuttle, Robert Mangold, Lynda Benglis, to name a few). The collection, much of which was literally kept under wraps, was crammed into the one-bedroom Manhattan apartment they shared with turtles, fish and a cat named Archie.

The Vogels are considered among the most important art collectors of the 20th century. Certainly they are it’s most unusual: an unassuming couple: Herb was a postal worker, Dorothy a librarian. Self-taught, they collected what Chuck Close called “the most unlikable, the most difficult art.” And the best thing is they did it all on a shoestring.

To be fair, the Vogels, did rely on a certain amount of creative financing, particularly when buying more established artists’ work. As the Vogels’ stature as collectors rose, artists naturally wanted to be part of their collection and so cut deals or arranged barters. For instance, the Vogels accepted a collage in exchange for taking care of Jeanne-Claude and Christo’s cat while they were away building Valley Curtain in Colorado.

I love the Vogels because they are obsessed and passionate and they show that challenging art is indeed accessible if you are willing to put in the time to develop an appreciation of it. Decidedly un-chic they went about the business of collecting in a quiet, modest way and managed to show up other pretentious poseurs. By the time I encountered them in New York in the early '80s they were well-known bellwethers, watched like hawks for what emerging artists caught their fancy.

The Vogels were not speculators, "buy what you love" was their motto, and they never sold anything to improve their humble lifestyle. They began working with the National Gallery in the early '90s and In an act of mostly selfless largesse, ended up giving their entire collection to it (832 works were donated outright; 268 were promised gifts; in 2008, 2,500 were distributed throughout the nation, with fifty works going to a selected art institution in each of the fifty states http://vogel5050.org/) in a combination of partial purchase and gift because as Dorothy has said, the collection was “built on the generosity of artists.”

The Vogels are the subject of the documentary, Herb and Dorothy (2008) by Megumi Sasaki.

Posted by Sarah Sargent at 4:07 AM