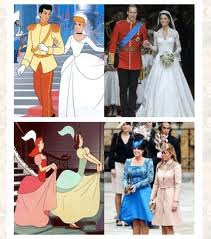 Having watched the royal wedding, all I can say is British Millinery art has taken a tragic nose-dive. I blame the fascinator. Whether it’s a twee, feathered pompom or a rococo ribbon sea creature, I think they all look ridiculous. Small, sassy hats aren’t new; they were very much the thing in the ‘40s. Back then, women’s hair was coiffed in a sleek manner suitable for setting off their headgear; nowadays girls (and long-in-the-teeth women) for the most part, wear their locks loose looking both sloppy and off-kilter.
Mother of the bride, Carole Middleton would have looked so much better if her hair had been neatly styled in a chignon (or the way she wore it for the evening reception) with the hat sitting more securely on her head. As it was, it looked liked she’d had an unexplained encounter with a Frisbee. One hat I liked at an extreme angle was Zara Phillips’s. But her hair was in an up-do and the hat had enough mass underneath—a large flower—to balance the angle.
I’m not against stylish exuberance. The late great Isabella Blow took to wearing outré headgear as a means to disguise her rather plain features (she was an early booster of both Philip Treacy and Alexander McQueen) and it worked because she had exquisite taste and knew how to complement what God had given her.
It’s one thing to have a sense of humor in one’s dress and to be adventuresome, but what woman wants to look like a buffoon? I mean, really. At the end of the day, isn’t the point to look one’s best and not like you’re wearing some dowdy number whipped up from great-aunt Maisie’s bedroom curtains?
Obviously the princesses Beatrice and Eugenie are fashion-challenged. One need only Google them to see the ghastly schmattas they insist on wearing. But given the circumstances of the day (the fact that their mother was persona non grata and banned from the wedding) the last thing they should have done was draw attention to themselves. (Ironically, I spotted Fergie—nearly ran into to her twice—the week before the nuptials in Penn Station of all things, in the company of Bravo’s Andy Cohen I think (reality show anyone?) and she looked very chic and very trim as she high tailed it to the DC-bound Acela.) But her daughters had a bratty me-me-me take on the festivities. Aside from ungracious, their choices were incredibly unflattering and though they are royal (or at least half so), they looked tacky and middle class. Commoner Kate, the great-granddaughter of a coal miner, in her elegant and demure dress looked effortlessly regal and beautiful.
I give high marks to Charlene Wittstock and Princess Leticia of Spain for their chic hats and ensembles. They at least got the fact it was a wedding, not a carnival. Others like Tara Palmer-Tomkinson appeared to have borrowed their outfits from the Ice Capades wardrobe stock judging from the loud color, frou-frou touches and overall matchy-matchiness. And the footwear! She, Posh and Samantha Cameron all wore shoes more suited to the West Side Highway then Westminster Abbey.
So I’ve weighed in with my vent, but I really wouldn’t change a thing because Princess Beatrice has spun dross into gold, auctioning the infamous hat off on ebay for (at this writing) over GBP 50,000 (!) to benefit UNICEF and I also realize that if Princess Anne, for instance, opted for Chanel instead of the Dame Edith ensembles she favors, the whole thing would be so much more boring.
Posted by Sarah Sargent at 10:26 AM 1 comment: