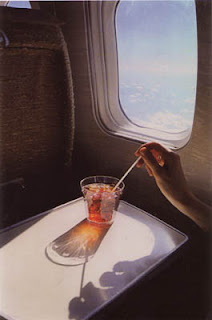 I wasn’t sure what my reaction was going to be to Catherine Opie’s show billed as a “Mid-Career Survey” at the Guggenheim, New York. I’d seen her photographs before: the highway overpasses and her self-portraits. Reproduced in magazines, I couldn’t tell if the former were just plain dull and the latter self-indulgent, in-your-face shockers. But face-to-face I was bowled over by her work and fell for it hook, line and sinker. Opie has such a great eye for composition and color and is such an exceptional technician; I don’t think there’s anything she can’t do when it comes to photography.

It turns out the highway overpasses are little gems. Opie makes such interesting choices, opting to capture these concrete megaliths using the rarified (and softening) platinum printing process and playing with their scale by choosing to produce such diminutive versions.

She more than makes her case for her pulls-no-punches queer focus. Unlike say a Diane Arbus, she’s not an outsider looking in at the marginalized. Opie records her peers with remarkable sensitivity producing something that is both authentic and compassionate. You don’t feel like you’re looking at a rogues’ gallery of freaks, but at quite brave, unconventional individuals. She celebrates the gay lifestyle in its more baroque manifestations, but she also wants to show it as a very ordinary, everyday kind of thing as in her series of lesbian couples from around the country. It’s Gay Pride personified. But her work is so much more than this. It’s just plain good. Just look at Frankie, such an arresting image that crackles and pops against its lush heliotrope background. I wanted to take him home and hang him on my wall. As I moved from portrait to portrait I kept thinking of all those Holbein and Memling peacocks and peahens regarding the viewer with a certain self-confident hauteur, and most of all Bronzino and Caravaggio. Surely Opie was sampling the latter two in Richard and Robert Blancon.

Which brings me to the series on endurance performer Ron Athey. These large format Polaroids are simply extraordinary. Measuring nine feet in length, the color and clarity is superb. Yes, the subject matter is challenging, but I was so taken with their overall beauty, I accepted unsettling images, heavy on body-piercing that recalled other martyrs like St. Sebastian and various pietàs. My favorite, Ron Athey/Pearl Necklace, is the most extreme. In it, the heavily-tattooed Athey bends away from the viewer. He’s in heels and has pulled up his gown to expose his ass from which orifice descends a long double strand of pearls. Everything about the image: the retrained palette, the great folds of sumptuous fabric, the dramatic low light, the monumental figure, the exotic pattern of tribal tattoos on flesh, even the pearls themselves, seems to echo a great society portrait by Sargent. It’s an elegant and beautiful image made more potent on account of its shocking subject. Like Mapplethorpe before her, Opie tempers disturbing images with transcendent execution creating work that soars above its individual parts into something sublime.

With their high horizon lines and their devolution into fog or snow white-outs, her contemplative studies of Malibu surfers and ice fishing shacks in Minnesota are Zen meditations on weather, nature and the steely determination of the practitioners of these hardcore pursuits. These spare, almost austere photographs taken with an ungainly field camera in extreme conditions showcase Opie’s color restraint and compositional sense to great effect, as well as her own determination to do what needs to be done to pursue her art.

I thought it would provide an interesting counterpoint to take in that eminence gris of color, William Eggleston’s retrospective at the Whitney, Democratic Camera, Photos Video 1961-2008. The contrarian Eggleston claims his work is not particularly Southern, but who’s he kidding? Just as Opie’s series on her colorful neighborhood, West Adams, screams L.A., there’s nowhere his (early) work could be with its properly coiffed, brittle women, its scrubby landscape and its urban blight, than the deep South. There’s a desolation—a certain hopelessness that imbues Eggleston’s work, perhaps reflecting the collective psyche of the vanquished and economically challenged post-war South. Certainly as one of the elite, growing up part-time on his family’s Delta plantation this broken dream of the South must have provided a compelling leitmotif. However he comes by it, no matter what Eggleston says, it’s present and it’s palpable. I even sense this melancholy aching in one of my favorite photographs, an image that conveys so much with so little: the cocktail on the plane. It evokes a whole storyline that’s not quite on the up and up. There’s something wanton in the shape of the hand and something illicit in the generous helping of bourbon backdropped by brilliant blue sky. Is the woman swizzling her drink headed to some far away trysting point with her lover? But perhaps my flights of fancy are prompted by Eggleston’s own flamboyant back story. Two others—the neglected freezer interior full of weird 1970s food and a shot of Elvis’s campy living room where curtain folds and their mirrored reflection become prison bars—are winners.

In the most recent body of work, Eggleston is working bigger and moving in a more abstract direction, leaving narrative behind and focusing on composition and color, a natural evolution, I suppose. I loved the flowers in cellophane which blurs them into inchoate splotches of color.

Taking what Eggleston refers to as a “democratic” approach where all things have equal visual merit, he has spent his career photographing mundane, everyday images. There’s nothing mundane about the end result. Rich color, crisp light and striking compositions all work together to produce extraordinary photographs. His groundbreaking work has inspired countless photographers including a star like Opie who’s appropriated certain aspects of his oeuvre and made them her own. As he toils away finding the beauty in the commonplace, Eggleston sums up his approach by saying he’s “at war with the ordinary.” Fortunately, time and again he wins.