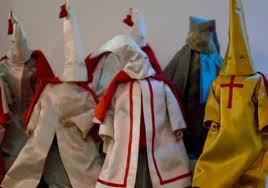 From his early deKooning-esque efforts to his “high risk” drawings, William Christenberry excels as a draughtsman, attacking the surface with elegant slashes of ink or graphite that are pure unions of freedom and control. His latter works are magnificent: gorgeous, sea nettle versions of trees—emblematic symbols for him of the southern landscape.
By far, the most powerful thing in the room is the series of 18 drawings of Klansmen. Positioned flag-like on the wall in alternating red, white and blue, and surmounted by a neon cross, these portraits are truly scary (and beautiful). Two other works positioned outside the room, Klavern 93, a huge, strident combo of pigment, text and image that presages Basquiat by some 20 years, and a suite of small works on paper,K House, where Klan den morphs into hood in successive versions, are on a par with these.