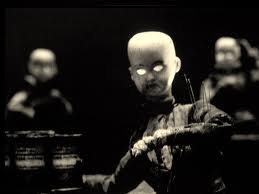 Intrigued by a macabre photo in the NY Times, I decided to go see the Quay Brothers’ show at MoMA. I must confess, I had never heard of the Quay Brothers and have to say their aesthetic is not mine. All that Victoriana. And dolls. Piero Fornasetti insipidness and Joseph Cornell dark whimsy...

However, I am drawn to obsessive, oddball artists. Indeed, the Quays seem like outsider artists even though they aren’t. I admire the fact that these twins, who settled in England in 1969 and seem to live and breathe only art, burst forth from rural Pennsylvania to scale the very heights of the art world.

I also admire their work ethic. Though most famous for their stop-action animation, featuring puppets made of doll parts and other materials, there’s nothing they haven’t seemed to have done. From the 1968 Blood, Sweat & Tears album cover (the Quays’ original headless design was altered to include the band’s heads) to T.V. ads. In fact, I loved their ads. Many of their films resemble the opening credits of the Monty Python show, which doesn’t float my boat, but the Doritos ad has a definite Brazil vibe and the ones for Slurpee and a British throat lozenge, Lockets, were terrific.

During their long and fecund career, the Quays have worked as professional illustrators designing book covers; they’ve also designed sets for theatre and opera (in 1998 they received the Drama Desk Award for Outstanding Set Design for the play The Chairs) and have shot music videos for various artists—artists I’ve never heard of, I might add, not that that means a thing.

I was interested to learn about the Polish Surrealists who the Quays admired and emulated, and I realized just how pervasive their influence was remembering back to the posters that graced my high school homerooms in the 1970s.

I sat through the Quays’ most famous film, Street of Crocodiles based on a novella of the same name (nearly all the Quays’ films are inspired by literary texts and feature compelling musical scores) because I thought I should, and liked some aspects of it, most of all the creepy eyeless dolls and the actual liver, but I was really drawn into the shorter film, Bruno Schulz, Fragments and Scenes—Sanatorium Under the Sign of the Hourglass (2006) (actually the "pilot" or preview for their third feature which is currently pre-production) that incorporates live action and nature with puppets. It was mysterious, shimmering and beautiful.

The Quays' objects have a uniformly excavated look, threadbare and covered with grime or dust. This cuts through the saccharin, but in trying to be sinister, is also trite. There are a number of references to screws and watch works, perhaps a tribute to their father, a machinist.

In 2010 the Quays were commissioned to produce a new film entitled Anatomica Asthetica focusing on the history and collections of the College of Physicians of Philadelphia’s Mütter Museum. Having long known of the gruesome nature of the Mütter and never quite having got up the courage to go there, it sounds like a match made in Heaven.
Posted by Sarah Sargent at 8:33 AM 1 comment: 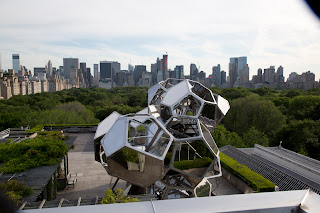 Tomás Saraceno on the Roof: Cloud City—part of Saraceno’s series Cloud Cities/Air Port City is a site-specific installation of 16 interconnected multipolygonal modules on the roof garden of the Metropolitan Museum. Composed of transparent, opaque and reflective materials connected by an internal network of staircases, the piece provides a funhouse experience where orientation is skewed. Discombobulation and vertigo flood one’s senses as one explores the interior space and tries to figure out what is reality and what is reflection. Taking in the exterior vistas framed through Cloud City’s apertures, it's clear that as with Big Bambu, New York City's an integral part of the piece.

On entering the structure the guards made me put away my pad and pen, which I thought silly, but soon realized I needed to grasp both handrails as I crawled, white-knuckled up the stairs. Though the piece goes up only 20 feet from the Met’s roof, one feels much higher seeing the city and park below. Some of the floors of the modules are clear adding to the knee-buckling experience. My companion said being in it felt like skydiving, which she has actually done. To me, it felt like I was inside an enormous kaleidoscope or even some giant honeycomb made by robotic bees. According to Saraceno: “Cloud City’s composition is based on a complex three-dimensional geometry from Weaire-Phelan, which is an idealized foam structure resembling the perfect packaging of spheres with a minimal surface and maximum volume."

Saraceno trained as an architect (he also attended the Space Studies Program of the International Space University at NASA’s Ames Research Center in California and judging from his writings about the piece is pretty out there) and there is a definite habitat feel to the piece. According to the Met’s wall dialectic this is intentional: “Over the past decade Saraceno has constructed habitable networks based on organic forms, naturally occurring geometries, and interconnectivity that merge art, architecture, and science. His multidisciplinary project Cloud Cities/Air Port City is rooted in an investigation of how to expand the ways in which we inhabit and experience our environment…Saraceno uses his art to envision floating or flying cities that defy traditional notions of space, time, and gravity. He challenges the boundaries of earthbound living and explores the possibility of utopian airborne habitation, looking to the atmosphere, rather than terra firma, for inspiration.”

All I can say is it's an exhilarating experience to be high above the streets of Manhattan in the ethereal Cloud City.