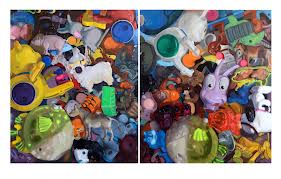 Megan Marlatt’s studio occupies the ground floor of an old commercial building near the train tracks in Orange, Virginia. She and her husband, acclaimed filmmaker and photographer Richard Robinson, live in a chic loft space on the second floor. A Louisville, Kentucky native, Marlatt, 55, is a professor of painting at the University of Virginia where she has taught for 23 years.

Marlatt is funny, joyful and pure—she is a lot like a little kid in a grown-up body. Her studio is chock-a-block full of her work, which ranges from enormous canvases in racks, to delicate works on paper in flat files. The studio is also full of the things she paints and the things that inspire her, so there are piles of plastic toys, the subject of her Molded from Complicated Mixtures series, Mrs. Buttersworth bottles, many kinds of dolls and stuffed animals. There are also the tools of her trade: brushes, jars of pigment, easels, a giant palette and shelves of art books. Part circus, part atelier and all Marlatt, you can feel the creative energy bouncing off the walls.

An inspiring teacher, Marlatt is also a disciplined, hardworking artist with a seemingly endless imagination who has won the respect of both peers and public alike, winning numerous awards (including a highly competitive Individual Artist Award from the NEA in 1995, the last year it was awarded), as well as public art commissions and residencies.

Following the death of her sister, she produced The Sister Series—a powerful work that fuses woman and nature in a mystical manner reminiscent of Frida Kahlo. In 2000, Marlatt created a series of extraordinary drawings inspired by Lewis and Clarks’ journey of discovery for UVA museum’s Hindsight/Fore-sight; Art for the New Millennium. Painstakingly researching the flora, fauna and Indian artifacts Lewis and Clark collected, she created “exhibits” based on these specimens. Her work while a graduate student as a sign painter has helped her with the many murals she has produced. Marlatt learned fresco at the Skowhegan School of Painting and Sculpture in Maine, and later taught fresco in Italy. She has produced both small and large-scale frescos; a Marlatt fresco adorns the side of the City Hall Annex in Charlottesville, Virginia and she also did frescos for Emmanuel Episcopal Church in Rapidan, Virginia.

In the past 20 years Marlatt has shifted her focus from food, to natural history, to toys. “I get bored every seven years or so and have to make a change,” she explains. Marlatt’s recent fascination with toys manifests itself in two different directions. First, there are her large assemblages that are both visually interesting and symbolically potent. Initially, it might seem they’re just about fun, but the jumble she paints references the chaos in our over-stimulated lives as well as the larger conflict-ridden world and points to our consumer culture where giant container ships arrive at our shores on an endless loop. The toys are both ephemeral and permanent: interest in them is short lived—the child grows up and moves on, yet the toys are made from materials that will never degrade, ensuring we’ll be stuck with them for eternity.

These works also offer many opportunities to flex artistic muscles, painting soft and hard, shiny and dull, masculine/feminine, animal/machine, etc. Marlatt starts by laying down large areas of acrylic color, which she then builds up with oil because, she says, “I can’t get the same kind of Chardin-like volume, luminosity, space and detail with acrylic; that has to come later with the oil.”
Both spare and rich, funny and serious, Marlatt’s series of tondos (circular paintings) feature beautifully painted Old Master-style portraits of cartoon character puppets (Olive Oyl, Pinocchio, Captain Hook). Using toys as opposed to serious subjects allowed her to paint in a traditional manner, while still maintaining a contemporary perspective.
Currently, Marlatt is working in three directions. She’s discovered that by incorporating toys with natural history, she can create interesting visual juxtapositions, revitalizing her delight in both subjects. Her richly colored and elegantly executed gouaches are composed of a number of individual vignettes that relate to one another both visually and symbolically. Gouache, basically opaque watercolor, enables her to create vivid, matte expanses of color.
But Marlatt is not content to remain focused on just one medium as her ongoing Drawing Roll; Start Here, May 2010 attests. Inspired by 18th century British artist, Robert Barker, who patented the panorama, Marlatt began drawing on a roll of cash register tape recording her surroundings when she was an exchange fellow from the Virginia Center for Creative Arts to the Tyrone Guthrie Centre in Ireland two years ago. Unrolling the paper a little at a time and turning to her right she will eventually circle and delineate a full 360 degrees of landscape with precisely executed images of exterior and interior scenes and cities that flows seamlessly from one setting to the next to make a continuing narrative of her life. Aside from the skill of the draughtsmanship, the brilliance is in how Marlatt chooses to frame her subject, what she includes and what she leaves out. For instance, New York, captured from her roost in Cobble Hill, Brooklyn, is described by just the top of the skyline with telltale Empire State Building and Brooklyn Bridge identifying the location. A travelogue that Marlatt only works on during trips, she has completed 40 of the entire 165 feet.
As if all this isn’t enough, Marlatt is at work now making a monumental self-portrait clay bust that is actually a form onto which she will put papier-mâché to make a capgrosso (giant head). A vital part of the Spanish folk art tradition, these giant heads are made for carnivals and parades. Marlatt’s ultimate plan is to don the finished head and paint her self-portrait wearing it. She has arranged to spend a week with Ventura and Hosta, master artisans of capgrossos at their studio in Navata, Spain following a 2012 summer residency at Can Serrat, El Bruc, outside Barcelona.
Switching back and forth between different media and genres holds Marlatt’s interest, enabling her to produce work that’s satisfying on many levels. A storyteller, art is her mode of expression and her passion. She is concerned about the human condition and the current state of the world, confronting these issues gracefully with beautifully painted images that are rich in humor, emotion and metaphor. MeganMarlatt.com
Virginia Living: 2012