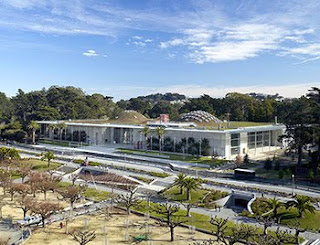 San Francisco's new Renzo Piano-designed California Academy of Sciences building houses aquarium, planetarium and a rainforest plus countless living microclimate exhibits, laboratories and a substantial library all under a living roof that is both a green and symbolic gesture. The roof is extraordinary, forming two grassy domes that are studded with round skylights. It extends 30 feet out from the structure on all sides.

The interior space is composed of a series of geometric shapes: a central glass cube enclosing snack bar and tables is bracketed by two 90-foot spheres, one solid: the planetarium, the other clear: the rainforest. Surrounding these are magical water features—a coral reef and a tidal basin—complete with flora and fauna. Nature is within and around the building—lovely Golden Gate Park provides the backdrop to the expansive glass walls on all four sides. It’s an airy, light-filled space; the overall effect is exhilarating.

I didn’t go into the planetarium, but wandered up the ramp that rose above a large pool through the rainforest where exotic birds and butterflies flitted. At the top, guards checked visitors for any potential AWOL insects before allowing them onto the glass elevator. This descended through the pool into the basement, shooting right past large fish swimming thisclose to the elevator side. A walkway led through a glass tunnel at the bottom of the pool, which afforded amazing views of fish above. Further along on the far side were tank upon tank filled with sea life. Upstairs, on the side terrace I came upon a beautiful Maya Lin net-like wire sculpture suspended from the ceiling that represents “the grid where the land meets the sea” in the San Francisco Bay Area

It was an uplifting experience, very different from the stuffy natural history museums of my youth. The building’s function is to present nature with clear-eyed authenticity; it accomplishes this feat in an up-to-the-minute and urbane fashion.

I next went to the San Francisco Museum of Modern Art to take in Half-Life of a Dream, Contemporary [Chinese] Art from the Logan Collection (July 10-October 5, 2008). The show features paintings, sculptures and installations produced between 1988 and 2008. This post-Tiananmen Square era has proved remarkably fertile for artists coming to terms with the idealized dream of China (and its fallout) as it fades into reality.

There’s so much going on here (no surprise, given China’s history) that on leaving the galleries, I felt like I’d attended a rather loud and raucous cocktail party, rather than an art exhibition.

There are exceptions. Wenda Gu turns the ancient art of Chinese calligraphy on its head using tendrils of human hair to form (as far as I could tell) nonsensical, yet familiar-looking writing in a piece that is both delicate and monumental. Ai Weiwei appropriates Neolithic clay pots, which he makes his own by dipping them in paint. Thus transformed, these ancient artifacts provoke thought on the nature of value—something that Weiwei simultaneously destroys and raises by his touch—and cultural heritage. His alteration can also be seen as mirroring Mao’s Cultural Revolution: sweeping out the old to make way for the new. Lin Tianmiao’s mixed media confections are ethereal and elegant and Sheng Qi’s poignant life size bronze, My Left Hand with its missing pinky finger (which he severed in protest following the Tiananmen Square massacre) derives real punch from the presence of a monumental version of the digit on the floor nearby.

I couldn’t help spotting whispers of Gerhard Richter (Li Songsong), Lucien Freud (Liu Wei) and Francis Bacon (Yang Shaobin). Songsong’s use of enlarged photo details are Richteresque, but his quite astonishing heavy application of paint puts him in a class all his own; the room was redolent with linseed oil though the paintings were completed in 2006 and 2007, respectively. Someday my Prince Will Come depicts a newsreel fragment—a distinctly phallic missile—from one of those PRC specialties: the highly choreographed parades of military strength. It’s creepy and funny and a dazzling tour de force of pigment.

I love Liu Xiaodong’s cheeky My Fat Grandson with the overfed youngster lolling in post-Happy Meal™ torpor against the trunk of a Mercedes. A stunning painting with rich color and lush brushstrokes, it neatly sums up the new China. Ditto Zheng Li’s Same Way Different Directions with its indolent, body-pierced, cigarette-smoking babies, beautifully rendered—quirky and disturbing.

Somewhat exhausted from the visual hullabaloo, I went to meet my friend, Bay Area artist, Katina Huston and her friend Helen at Cafe Rulli in Union Square in advance of a tour of the downtown gallery scene. After a restorative pastry and cup of joe, we set off for 49 Geary Street, a building chock-a-block full of galleries.

We went through a number of shows, many forgettable. There were some plums though: at Gregory Lind Gallery. Sarah Walker’s psychedelic cartographical paintings are compelling (though I’m not sure if her pulsing circuit board-like work shouldn’t come with a warning label about triggering epileptic fits in susceptible viewers) and at Haines Gallery, Zhan Wang’s installation, Gold Mountain consisting of Sierra Nevada rocks side-by-side with their stainless steel casts. I loved the contrast of the rough natural stone and its cool metal counterparts.

Across the street at Gallery Paule Anglim, Katherine Sherwood’s lovely restrained, large-scale paintings that were both linear and painterly and my favorite, Annabeth Rosen whose luscious glazed ceramic bulbous mounds on their metal stands had just the right amount of beauty and roughness. It was the night of the vice-presidential debate, so I skipped the “First Thursdays” opening receptions and high-tailed it back to my hotel room for some first-rate performance art.