A Little Late to the Party 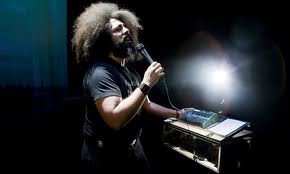 Though he’s referred to as a comedian and musician, I would call him a performance artist. He uses improvisation, stream of consciousness and a rotating cast of personae—he has a great ear for accents—mixed with a cappella compositions and a sound mixing control board.

Born in Germany, the only child of a French mother and an African-American father, Watts was raised in Great Falls, Montana. From the time he was five until he was 16, Watts studied piano and violin. He attended the Art Institute of Seattle before eventually studying jazz at Cornish College of the Arts. Along the way, he played in a number of Seattle bands of wildly varying styles/genres.

Watts reminds me of a funky Laurie Anderson, taking big ideas—Watts has a serious interest in theoretical physics—combining them with music and voice filters. Anderson’s music has classical origins; Watts’s is rooted in jazz and soul. His complex musical compositions also remind me of another favorite, The Orb.

Posted by Sarah Sargent at 9:38 AM