Oops, I did it again 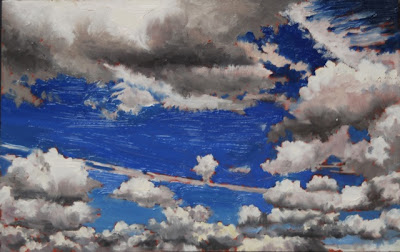 I'm not in the habit of quoting Britany Spears. (I'm not even sure if that's how you spell her name and perfectionist that I am, I'm not even bothering to look it up.) In any event, I did do it again, I bought another piece, even though I was saving up for a small Robert Stuart and have many other more ant-like ways to not spend my money. But I was minding my ps and qs taking in an exhibit of the work of Michele Harvey at the Fenimore Museum in Cooperstown when I passed a case containing some of her small works and BAM there it was calling my name. Being the grasshopper that I am, I couldn't resist this one and the price seemed in range as oppposed to so far out there it wasn't attainable. In any event, it's a small study, just 4" x 6.5" of clouds against a heart-stopping cerealan sky, it's very representational, but because it's wall-to-wall sky and a small gem of a piece it got me where I lived. It's called Bit of Blue.
Posted by Sarah Sargent at 11:29 AM No comments: 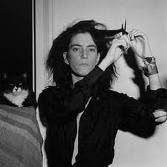 I'm writing my review of Just Kids, a must read for anyone interested in the artistic process. So inspiring, this tale of youthful exuberance.
I have such admiration for Patti Smith such a nurturing, nonjudgmental force. She embodies the true nature of non-conditional love.
For the review: http://www.artillerymag.com/v5i2/featured-articles/featured-3.php
Posted by Sarah Sargent at 7:51 AM No comments: 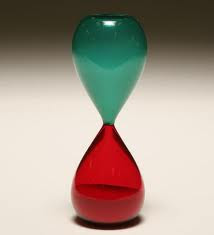 My latest obsession has been hourglasses. Not just any hourglasses, but the beautiful Murano Glass ones. The trigger was a similar one my sister gave her husband at Christmas last year. Seeing it I remembered visits to her godparents’ house in New Haven. A childless couple, they’d lived abroad for many years and settled in New Haven because of Aunt Polly’s avocation as book binder and her affiliation with Yale University. Elegant and chic she smoked Cuban cigars smuggled in for her by my father in a Crest toothpaste box. (It fit four perfectly.) Their house oozed style, from the Calder stabile on the coffee table to the 18th century panoramic wallpaper of St. Petersburg (Uncle Valla was a White Russian) in the dining room, where swaths of blue and green tulle formed the glass curtains, to the larger than life mirrors in the bedroom cut into his and hers Picasso-like nudes.

One thing that enchanted me particularly was the purple and green hourglass that sat on a bookshelf in the library. About 10" tall, it was heavy and the glass had a lovely watery quality. I delighted in turning it to watch the sand slide slowly through the hole, captivated not only by the lusciousness of the glass but also by the realization that right before my eyes time had become tangible.

I hadn’t thought of that hourglass in years, not until my sister’s gift, which made me remember and then covet it. In March I was in New York and dropped into Chelsea Passage at Barneys. I was half hoping to find some token for my hosts when I spotted an hourglass that made my heart skip a beat. Slightly smaller than Aunt Polly’s it was stunning: one half was a vivid emerald while the other a brilliant orange. I picked it up thinking it would be around $100 and nearly fainted when I saw the price was $750! I replaced it gently on the shelf and left.

When I got home I researched Murano hourglasses and discovered they are highly sought after, with the vintage ones going for several thousand dollars. Of course when you think of the craftsmanship that goes into them: creating a sealed glass object with two distinct colors filled with sand, it’s not surprising they are so dear. I have a vague memory of going to Murano when I was 10 and watching a glassblower with his long tube transform molten glass from a fiery orange blob to delicate translucence, but I can’t imagine how they make the hourglasses.

I hadn’t got around to asking my sister where she’d gotten hers and it wasn’t exactly what I was looking for when I happened to be in Marshalls and found a trove of Murano knock offs! I snapped up a purple and green one, which looks remarkably like the one of my youth. I still think about the beautiful one I saw at Barneys but for now I am happy with my Murano trainer that cost a fraction of the price. Just like at Aunt Polly’s it sits on a bookshelf. Every now and then I turn it over to watch time slip away.

Posted by Sarah Sargent at 4:36 AM No comments:

With the Void, Full Powers

My Review of the Yves Klein Show at the Hirshhorn is in the September issue of Artillery magazine and is posted on my blog in the Online Articles section. Because Klein was such a powerhouse, whose influence on Contemporary Art cannot be overstated, I also wanted to post my review in its entirety here.

It was 102° in Washington the day I went to the Yves Klein show at the Hirshhorn. White hot, shimmering haze cloaked the city, making the prospect of an afternoon surrounded by expanses of IKB (International Klein Blue), so evocative of the sea and sky of Klein’s native Cote d’Azur, immensely appealing.

Klein virtually invented conceptual art. Indeed, much of what we take for granted about Contemporary Art can be traced back to him—quite an accomplishment for someone who was only active for eight years before dying prematurely at 34. The son of two painters, Klein was raised in an art hothouse, which explains his immense creativity and the ease with which he switched from one medium to another.

From the very beginning, Klein was fixated on monochrome paintings. Initially he painted them in a variety of colors, but he was unhappy with what he felt was a superficial effect and so he narrowed his concentration to “Yves Klein” blue. For him, the hue was more than just color; it was dimensionless, representing sky, water and space, in short, the immaterial world. The quest for immateriality was central to Klein’s oeuvre and his more conceptual pieces (the release of 1001 blue balloons in Paris, The Void exhibition consisting of an empty art gallery and the sale of “immaterial pictorial sensitivity zones,” empty space he “sold” in a transaction involving the exchange of gold ingots for a receipt, which the purchaser then burned, leaving the artwork to exist only in memory) are natural outgrowths of this attitude.

A showman and master of self-promotion, Klein operated in what seems like a perpetually manic state, with a finger in all manner of different art “pies.” One senses the urgency in him. Perhaps, on some level he knew his time was limited, or maybe it was, in fact, the creative fire burning within that cut his life short. His extensive writings, the many plans and maquettes he produced reveal a holistic approach to art (as well as a more than passing interest in science) and faced with all this, I couldn’t help thinking of Leonardo da Vinci.

As Klein ventured more into spirituality, he expanded his monochrome palette to include gold leaf, which symbolized the passage towards immateriality, and pink, representing flesh, thereby creating a potent trinity. In addition, he produced, fire paintings, “cosmogonies” (plant and rock impressions) and the infamous “anthropometries” in which nude models (“living paint brushes”) were coated with paint and dragged or laid across the painting surface.

Klein also created sponge reliefs and sponge sculptures—sponges, which he initially used to apply paint, became important symbols for him. Their absorption of paint made manifest his concept of the “impregnation” of the material with the immaterial. He planned to float the sponges in the air (levitation being another form of immateriality) using a combination of helium and electromagnets, but never did. He also collaborated on kinetic sculptures with the sculptor, Jean Tinguely, and took plaster casts of well-known items (human torsos, the Victory of Samothrace, a globe) coating them in IKB.


His technique of applying pure pigment suspended in synthetic resin onto gauze-covered panels allows for an incredibly deep saturation of color and creates a glowing three-dimensionality. Though static pieces, they are animated by the blue and seem almost to vibrate. The “monogolds” have indented surfaces that add shadow and shape. Standing before them, one is met with an indistinct reflection, a blurred and muted view of reality that provides an evocative window into another world.

The anthropometries vary from lyrical explosions of pigment to tribal totems and the fire paintings with their artfully scorched surfaces are beautiful—both muscular and graceful. Some look like they’ve captured the very fire they were burnt with, others resemble cyanotypes making one wonder if the alchemy of intense heat on paper actually caused some kind of photographic exposure.


The films of Klein at work are as amusing as they are interesting. The marriage of surreal and serious is so very French. Neatly attired in dapper suit or tuxedo, Klein’s earnest demeanor in the center of such oddball circumstances recalls the antics of that great master of deadpan, Jacques Tati. One segment shows an anthropometric performance before a rather prim looking audience, dressed in cocktail attire. At this early art happening, the comely living paintbrushes do their stuff accompanied by an orchestra playing Klein’s 1949 composition, The Monotone Symphony, which consisted of one chord played for 20 minutes, followed by 20 minutes of silence. In spite of the respect I have for the finished product, the spectacle’s more than passing resemblance to a Crazy Horse nightclub routine, or even mud wrestling is hard to shake. The other memorable segment shows Klein executing a fire painting with what looks like a flamethrower assisted by a uniformed fireman manning a fire hose.


Klein certainly had some pretty wild ideas as his manifestos attest. With The Blue Revolution he wanted to cover the entire surface of France in blue. Blue H-bombs were also on the agenda and he wrote to those in power (Eisenhower, Castro, etc.) to try and get his ideas realized. Certainly, this was part of a larger immaterial artwork, but there is an aspect of Klein that makes you believe that on some basic level he really embraced these ideas. He pursued them doggedly, his persistence, a reflection of the fighting spirit of judo (of which Klein was one of the best masters in France) where each defeat is viewed as a step toward victory.


Despite all the hype and hyperbole, and the bizarre notions, there is something authentic about Klein. His work’s got the goods. After all these years it continues to hold up and is as fresh and beguiling as it ever was.