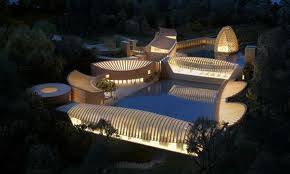 Ever since I first got wind of it, I have been rubbing my hands together in delight at the anticipation of the opening of Alice Walton’s Crystal Bridges museum in Bentonville, Arkansas. It’s just too delicious for my inner snark to resist. First of all there’s the name. Crystal Bridges. Who names an art museum that? At best, it sounds like a shopping mall, at worst, a “memorial garden.” But the museum is serious stuff (the embarrassingly cute video on its website notwithstanding) no Thomas Kinkade's "paintings of light" or Little Mermaid cels here. Norman Rockwell is represented, but then so is Jenny Holzer and, even more bizarre, given his skewering of corporate imperialism and the destruction of the environment, Walton Ford. (No family connection, I trust!)
I have not seen the Moshe Safdie-designed complex in person, though I've studied the photos. Let's just say that if I saw it and didn’t know what it was called, I would call it Crystal Bridges. It’s glitzy with a lot of glass and yes, what look like bridges over turquoise expanses of water. At night, it lights up like a Christmas tree. It would not look out of place in Las Vegas or Dubai.
The museum focuses on American Art from the colonial era up to the present day and it’s been busy Hoovering up as much as it can from private collections and smaller museums and institutions that have fallen on hard times. Thomas Eakins’s The Gross Clinic has been sucked up for a cool $68 million as well as Asher B. Durand’s iconic Kindred Spirits from the New York Public Library. Most disturbing, Ms. Walton recently visited the Maier Museum of Art, at Randolph-Macon College in Lynchburg, Virginia, which boasts a superb collection of American paintings. It’s a particularly sad state of affairs given the genesis of the Randolph Macon collection. Started by art professor, Louise Jordan Smith, who felt that a liberal arts education must include familiarity with the art of one’s own time, she established an annual contemporary art exhibition in 1911, and nine years later, the Randolph Macon Art Association, which raised funds for the college to purchase a work from each exhibition.

Operated on a shoestring, the collection grew over the years to include seminal pieces by Modern American masters as well as a significant holding of 19th century art. Smith purchased incredibly strong work, including George Bellows's glorious Men of the Docks. Acquired for a few thousand dollars, it appreciated to many tens of millions over the century or so it was owned by Randolph Macon and was the first to go in 2007. Now, with Walton sniffing around the place, you know the others are also in jeopardy. What a contrast these two women provide: Smith had limited funds and only her amazing eye to go with and a belief in bringing art work directly to students; Alice, equipped with a fat wallet and the best art consulting advice money can buy seems to be motivated by the desire to build a monument to herself.
I have purposefully avoided reading anything about Crystal Bridges as I wanted to put my own particular spin on things. But I did catch a fawning article in Forbes http://www.forbes.com/sites/abigailesman/2011/11/14/how-alice-waltons-crystal-bridges-exposes-the-foolishness-o-occupy-wall-street/ using the museum as an example of how ill begotten Occupy Wall Street is. The gist being we should be grateful to billionaires like Alice Walton who have the means (and the low tax bracket) to bestow gifts like this on us. More specifically, the reporter lauds Walton for creating jobs and stimulating tourism when she could have easily been spending her money on baubles. A let-them-eat-cake attitude if I ever heard one, this perspective, among other things, completely misses the point of OWS.

I certainly am grateful for the generosity of wealthy donors. But let’s not go overboard whitewashing their wealth in the process. To talk about Crystal Bridges in terms of some sort of sacrifice (she could be spending money on bracelets, private planes, mansions) is ridiculous. Shoot, Alice Walton could build a museum in every state and still not feel the pinch; she's a BILLIONAIRE several times over. In reality the museum, big and attention-grabbing though it may be, is a pittance of the debt the Walton family, who epitomize the expression: “a few profit, we all pay” truly owe America. As Elizabeth Warren so eloquently puts it: "There is nobody in this country who got rich on his own—nobody. You built a factory out there? Good for you. But I want to be clear. You moved your goods to market on the roads the rest of us paid for. You hired workers the rest of us paid to educate. You were safe in your factory because of police forces and fire forces [sic] that the rest of us paid for. You didn’t have to worry that marauding bands would come and seize everything at your factory—and hire someone to protect against this—because of the work the rest of us did. Now look, you built a factory and it turned into something terrific, or a great idea. God bless—keep a big hunk of it. But part of the underlying social contract is, you take a hunk of that and pay forward for the next kid who comes along."
I will go further: to me, Wal-Mart is one of the real villains in our economic downturn, not to mention the dumbing down of American standards and style. Wal-Mart made its billions eviscerating businesses and towns across America and selling imported schlock, mostly from China to people who didn't need it and couldn’t afford it, all the while taking advantage of its workers. I ask you, what’s to like?
Okay, yes, in the creation of Crystal Bridges, Ms. Walton has created jobs and boosted her hometown’s economy, but how many/what sort of jobs? I doubt the crème of the museum (the curators and administrators) come from Bentonville—and how big an impact (“a corner of northwest Arkansas”) are we really talking about? My one hope is that the art will speak to people and maybe raise them up in some way out of their Wal-Mart-induced fog of mediocrity.
If, as the Forbes writer suggests, Alice Walton is motivated by generosity why didn’t she establish a foundation that would support small museums around the country like Randolph Macon’s that are struggling to maintain their collections, rather than raiding them? New York’s wonderful American Museum of Folk Art almost closed earlier this year. No doubt it and many other struggling institutions around the country could do with an injection of Wal-Mart cash. (Reportedly, Ms. Walton refused to support the museum because she was offended by the work of Henry Darger. Oy.) But this kind of support doesn't grab headlines the way a splashy new museum does.

All the eleemosynary posturing aside, Crystal Bridges is about ego, self-aggrandizement and legacy; it's Alice Walton's gambit to add the sheen of culture and taste to the Wal-Mart name with what I can’t help feeling is a heavy dose of nya-nya-nya-nya-nya directed at the art establishment.In the end for me it’s a missed opportunity because I question whether we really need another traditional American Art museum. Why not instead take a page from Louise Jordan Smith’s book, or Herb and Dorothy Vogel's for that matter, and support contemporary emerging artists, living people who could really use the money and who's life's work pushes American culture forward. (I’m not talking Jeff Koons here.) Now, that could be really exciting. But this requires imagination, bravery and most important, connoisseurship—a real understanding of art and what the role of contemporary artists is. They are not supposed to regurgitate the past ad nauseam; their work should be rooted in the present, reflecting the era and atmosphere in which it was created. Of course, if Alice Walton is put off by Darger, there’s not much hope for her in this department. Better to stay safe within an area where the boundaries are laid out and the standards are set and for this end, Crystal Bridges (the name, the design, the mission) fits the bill.
Posted by Sarah Sargent at 5:46 AM No comments: