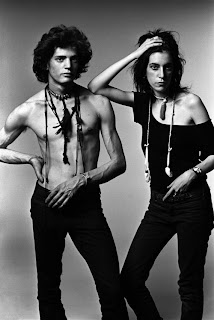 Patti Smith’s memoir, Just Kids, opens with a scene of poignant synchronicity. She has come downstairs to find the TV on, airing a production of Tosca. She is transfixed by the aria, “Vissi d’Arte” (“I lived for art”). The phone rings and she knows before she answers it’s the call informing her that “the artist of [her] life,” photographer, Robert Mapplethorpe has died.

Smith’s book is a powerful account of the evolution of an artist, or in this case, two artists. It’s also a story of unconditional love. Centering on Smith’s complex and passionate relationship with Mapplethorpe, it follows the two as they develop from unformed 19-year-olds living a marginal existence in Brooklyn, their subsequent move to that hotbed of creativity and eccentricity, the Chelsea Hotel, and their eventual development into cultural icons. Muses, lovers, artistic collaborators, soul mates, the two shared a bond so deep it survived Mapplethorpe’s blossoming homosexuality and Smith’s own romantic diversions (including an interlude with Sam Shepard).

Tall, lanky with dark mops for hair and large, arresting eyes, if not exactly twins, the two looked like siblings and must have cut quite a figure among the Chelsea denizens with their theatrical thrift shop finds and natural élan. Smith credits Mapplethorpe with giving her self-confidence, always insisting they should view themselves as artists—not wannabes, but “ares.” Yet, despite the chutzpah, they come across as enchantingly down to earth, even after fame finds them.

New York was a different place then; in the 1960s and ’70s it was possible for the indigent to coexist with the well-heeled in a place like the Chelsea Hotel. Money wasn’t the god that was worshipped, it was talent and individuality and if you had those, you were in. So they rubbed shoulders with Jimi Hendrix, Allen Ginsberg, Janis Joplin and the like.

Neither Smith nor Mapplethorpe had a clear vision of their artistic path. All Smith knew was that she “wanted to infuse the written word with the immediacy and frontal attack of rock and roll.” Mapplethorpe’s journey from Joseph Cornell imitator to consummate photographer was a circuitous one. As Smith deftly explains, Mapplethorpe found his artistic voice as he discovered the true nature of his sexuality.

“Robert took areas of dark human consent and made them into art. He worked without apology, investing the homosexual with grandeur, masculinity, and enviable nobility. Without affectation, he created a presence that was wholly male without sacrificing feminine grace. He was not looking to make a political statement or an announcement of his evolving sexual persuasion. He was presenting something new,something not seen or explored as he saw and explored it. Robert sought to elevate aspects of the male experience, to imbue homosexuality with mysticism. As Cocteau said of a Genet poem, “His obscenity is never obscene.“

For most of us, a lover’s “switching sides” would have been a bitter pill, but Smith takes it in stride, even resuming their intimacy after Mapplethorpe’s initial (pre-AIDS era) gay experimentation. When asked in a Fresh Air interview if Mapplethorpe’s homosexuality bothered her, she said it didn’t because she knew that no man or woman could ever have what they had — a very evolved, egoless attitude that extends to how Smith comports herself in all aspects of her life and art. Raised in a household where there was little money but abundant love and a reverence for culture, Smith embraced Arthur Rimbaud at an early age, crediting him with saving her from the drudgery of a mind-numbing factory future. When she moved to New York all she carried in her plaid suitcase was a copy of his Illuminations, her paints, a pad of art paper and a few clothes. A true intellectual, her focus was the world of the mind, never the world of material things.

Smith writes beautifully, with a poet’s touch, as this paragraph attests:

“When I was very young, my mother took me for walks in Humboldt Park, along the edge of the Prairie River. I have vague memories, like impressions on glass plates, of an old boathouse, a circular band shell, an arched stone bridge.”

Smith and Mapplethorpe’s art developed within the crucible of hard times. A brave art battalion of two, they had no distractions, no money to go anywhere, no gadgets to eat up their time. Off the grid, they could focus all their spare time and energy on their art. Today, cell phones and computers, gaming, social networking, provide so much distraction one doubts if the kind of concentrated thought and experimentation that was necessary for Mapplethorpe and Smith to develop their oeuvres is still possible.