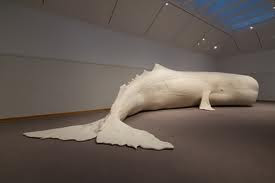 I love it when you stumble upon an artwork by someone you’ve never heard of before that just blows your socks off. A couple of weeks ago this happened at the Virginia Museum of Fine Arts when I came across Tristin Lowe’s incredible life-sized whale sculpture, Mocha Dick. 52 feet long and constructed of creamy industrial felt, the sculpture features an inflated interior frame, which imparts a lifelike tautness to the form, suggesting skin covering flesh and bone. A venerable beast, this whale is battle-scared from a life spent roaming unfriendly seas and features clusters of finely detailed, appliqué barnacles across its surface and two soulful eyes that gaze out from within puckered lids. It's a work of real power that conveys both awe and empathy for the animal.

I liked the yin and yang dialogue between the exceedingly realistic details and the medium, which is pure artifice with its exposed stitches and zippers crisscrossing the wooly surface. The piece took six-months to create in collaboration with the Fabric Workshop and Museum in Philadelphia and involved a team of technicians and apprentices overseen by Lowe.

Exhibited alongside the sculpture are a whale oil lamp, a Robert Salmon painting of whaling ships in a harbor and a Rockwell Kent of a sailor on a ship’s rigging, I gather they are present to anchor the piece within the whaling narrative, but they seemed anemic—completely de trop, in fact—against the backdrop of such a show stopper.

At first I thought Mocha Dick was the artist’s play on Moby Dick, but I read in the exhibition dialectic that Mocha Dick was a real albino sperm whale that inhabited the waters off Mocha Island in the South Pacific. Mocha Dick was legendary, reputedly having attacked 20 whaling vessels. He was described in Knickerbocker magazine in 1839 as “white as wool . . . as white as a snow drift . . . white as the surf around him.” The account appeared in the magazine again in 1846, five years before Moby-Dick was published and while it's widely accepted that Melville was inspired by the events surrounding the sinking of the ship, Essex by a whale, given the similarity in Mocha Dick's name and the fact he was also albino, it’s clear he played a part in Melville’s inspiration.

Lowe acknowledges a longtime fascination with both Moby-Dick and maritime history, but he says the work's also about something more: “This project was like the story of Moby-Dick—embarking on a journey, transfixed by the call of the sea. It is not about Ahab’s quest for revenge, and not even about the whale itself, but more about Ishmael’s search for the unattainable.”
Posted by Sarah Sargent at 7:41 AM