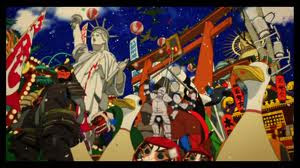 Last week I went to see Hugo, Martin Scorsese’s charming valentine to Paris, his daughter and the "cinemagician," Georges Méliès. We got there early only to be subjected to a barrage of ads for Coke and cars and, worst of all, a faux movie trailer for Activision's new toy/video-game hybrid: Skylanders, which features Spyro, the fire-breathing purple dragon along with 32 other characters. Watching it, I felt like I might have an epileptic fit and my niece who at 19 has been subjected to way more technology than I, said she couldn’t follow it—just the ticket for the ADHD crowd! The cutsey animal figures are designed to hook small children, but their bratty attitude, special effects and heavy metal soundtrack will ensure they stick around through puberty. I can picture them with their jaws hanging open as they stare wide-eyed at the screen and pity the parents who will be badgered into buying the crap. My niece and I both thought the trailer/ad was horrendous: violent, smart-alecky and just plain obnoxious. No wonder society is going to Hell in a hand-basket if this is what our junior citizens cut their teeth on.
I happen to be a fan of animation. I used to regularly attend an animated film festival when I lived in New York, which featured short films made by people like Gary Larsen. I find I can return to an animated film again and again, I think because, in a very real sense, it is a piece of art. I am captivated by the visuals that transcend whatever narrative is going on. My favorite animated film is The Triplets of Belleville. I think I could write a dissertation on it. It is so visually rich with so many wonderful touches that evoke France and the French. The Triplets radiates humanity. I love how the characters look, how the dog ages as the film progresses and his film-length grudge against the train. Sylvan Chomet employs live action film within the animation, which makes for a really interesting effect. There are also several different animation styles used throughout from retro looking black and white employed to render the wonderful Django Reinhardt, Josephine Baker and Fred Astaire-like personages, to hard-edged lines and rich color, to areas which use a light, delicate hand and pale hues. There's very little dialogue; when it is used (with one exception), it almost sounds like French gibberish: conveying the language without really saying anything. The soundtrack is simply marvelous with a swingey '30s sound. I recently viewed Sylvain Chomet's newest film The Illusionist which I am happy to say is on a par with The Triplets. The film's protagonist is based on Jacques Tati's Monsieur Hulot. The animated film includes a snippet from Tati's brillaint, Mon Oncle. Tati is someone I liked mildly when I first saw his films years ago, but now I think is brilliant. His social commentary, made primarily through the use of sight gags, is spot on.
Other animated films I admire are Waking Life, The Secret of Kells (beautiful soundtrack) and Waltz with Bashir, which uses animation brilliantly to tell the story of the Sabra and Shatila massacre, an event almost too horrific to relate using ordinary means.
While I was watching the abysmal Skylanders’ ad, I was thinking specifically about a relatively new film to me, Paprika, an anime confection by the highly regarded Satoshi Kon. Its bright colors and zippy vibe can compete with Skylanders, but Paprika is so imaginative and visually stunning, you don’t feel like watching it is going to burn out your eyes and rot your brain. On the contrary, you are simply dazzled.
Posted by Sarah Sargent at 2:12 PM