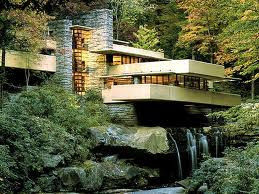 I made a pilgrimage to Fallingwater on Tuesday. It’s a five-hour drive from Charlottesville that is if you don’t make any wrong turns (which unfortunately we did thanks to my defective navigating) so it is an undertaking to go. In my book, it’s up there with Monticello as required viewing.

It was my fourth visit. I first went as a young girl of 16. I had accompanied my parents on a white water rafting expedition to the Youghiogheny River. But it was spring and the water was high and the river was closed. So here we were in the backcountry of western Pennsylvania casting about for how to fill our weekend when we discovered that Fallingwater was just down the road from the unfortunately named, Ohiopyle.

My first impression was of walking on woodland paths lined with tall rhododendrons and mountain laurel. It was a gray day and as I came around the bend I spotted the house. I remember being totally bowled over because it wasn’t the white that photographs had led me to believe, but a glowing peach—a perfect foil to the lush foliage surrounding it. The “Cherokee red” of the window trim (which I had thought was black) was another unexpected delight. The colors gave the house such vitality and transformed it from iconic old chestnut to fresh, dazzling magnet.

Entering the living room with its riverine slate floor, nearly wrap-around windows and rich autumnal colors, I felt immediately as if I’d come home. With the exception of the replacement dining chairs (looking at them you realize why Wright was such a dictator when it came to the interior design of his houses) and one or two tchotchkes, I loved everything in the house and the rich pastiche of diverse ethnic fabrics, artwork, objects that seem to be a common thread among Wright’s clients (following his lead, no doubt). But perhaps the most magical quality of the house was the constant background noise of rushing water.

On this latest trip I am again in awe. Fallingwater teaches you so much about architecture, nature and sheer gutsiness. It’s such an audacious design, a complex confection of intersecting planes that hangs against the hillside. Visually, it’s so different from the landscape that surrounds it and at the same time so in sync with it. Like some bright exotic bird in a rainforest.

One of my favorite views is not the famous one shot from below which makes Falingwater appear monumental, but from the bank across a narrow chasm from the house. You can almost reach out and touch the terrace wall and certainly could call to a person standing there and, on certain months when the water is low, carry on a conversation. From here you get a real sense of Fallingwater’s intimacy. Though it’s larger than life in so many ways, its scale is human. For all its elegance and superlative design it is in essence, cosy. The low ceilings, narrow halls, small bedrooms and liberal use of warm, rich materials enhance this coziness. I think about what bliss it must have been to live in such a house, to have it to yourself, wandering about the empty rooms, walking down the steps to dip one’s toes in the stream, sleeping with the windows thrown open to the air and the sound of the falls…

It is rare when something manmade enhances a beautiful natural setting. But Fallingwater does. As I gazed at it from a distance, I tried to imagine the landscape without it and I was faced with an appealing but otherwise unremarkable scene of water spilling over rocks: with Fallingwater perched over it, it’s launched into the realm of the sublime.

Posted by Sarah Sargent at 7:43 AM