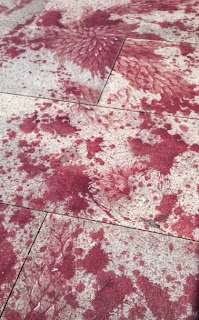 I think one of my favorite spots in New York is the roof garden at the Met. It's a glorious island surrounded by green with a nearly 360 view of the city rising above Central Park. It also has been the site of some pretty spectacular contemporary installations, such as the Starn Brothers’ Big Bambu and Tomás Saraceno's Cloud City.

Recently, I set my alarm and got to the museum when it opened and hurrying back to the elevator was whisked up to the roof before the masses had made it through the intervening galleries. I was rewarded by having the place to myself save for a couple of guards and baristas at the coffee bar. It was a glorious morning. The city sparkled all around.

The beautiful and classic vista of New York, my hometown, is reassuring and timeless, which is perhaps why Imran Qureshi's (born 1972), painted commission (his first large-scale installation in the United States) resonates so powerfully.

Thus far, 9/11 and the Boston Marathon aside, we have been spared the almost quotidian carnage happening in other parts of the world: Iraq, Israel, London, and Quershi's native Pakistan. The splatters and blotches in dried blood red powerfully evoke the ghastly aftermath of a suicide bomb. It's a powerful memento mori that hits you like a brick. And yet...within the awful splatters we discern delicate leaves emerging, beautifully rendered with chalk-like white highlights in the delicate style of the miniaturists who worked for the Mughal court (1526–1857). They're life and hope, civility and lyricism blooming from within the vestiges of violence. In Quershi's words: "Yes, these forms stem from the effects of violence. They are mingled with the color of blood, but, at the same time, this is where a dialogue with life, with new beginnings and fresh hope starts."

If only people could only cleave to these fragile fronds rather than the murderous hatred that rips us apart.

Posted by Sarah Sargent at 6:54 AM