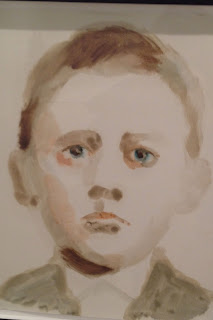 Back in June at the “Paper” show at the Saatchi Gallery in London, I discovered several knockout artists. Chief among these was Anne Kevans. Her series of portraits of 20th century dictators as children (Hitler, Idi Amin, Bokassa etc…the whole rogues gallery) entitled Boys, hit all the right notes.

Painted with a light touch in muddy greens and ochres, Kevans’s elegant little watercolors are appealing in and of themselves: she exercises admirable restraint both in her style and the information she imparts. The added helping of creep-out we experince recognizing in these scared little faces, the familiar features we have come to abhor, takes them over the top. While there is subtlety in Devans's approach: using a minimalist style to represent these monsters when they were children (maybe not so innocent, judging from the expression on some of their faces, but at least non-threatening), the sheer quantity of baby dictators (taking up three gallery walls) is staggering.

Anne Toebee’s bird’s eye views of rooms are odd and inventive. In these bizarro floor plans, things don’t obey the same laws of perspective with counters, chairs and appliances oriented every which way.

I love the way Toebee combines rather dry draftsmanship with painterly areas. She clearly appreciates vintage interiors and patterns. In fact, the mini brick linoleum she depicts in The Doctor’s Wife is what caught my eye in the first place being the very pattern my grandmother had in her kitchen in Maine.

Named for the daily newspapers they’re made from, Jodie Carey’s sepia colored arrangements of flowers look like dried flowers you would find under a bell jar on a mantle. There’s something Victorian and something slightly funereal about them. There’s a pleasing marriage between the humbleness of the material and the elaborateness of the execution.

Eric Manigaud’s drawings of photographs taken at the Nazi-run State Care and Medical Facility in Weilmünster, Germany where Jewish patients (mental and other) were forcibly sterilized or starved are incredibly powerful. Beautifully executed, these large-scale drawings of human suffering command attention. Portrait Clinique # 10, which shows a distraught girl, her face distorted by the rough grip of a nurse is particularly arresting. Manigaud’s drawings of bombed Cologne grab our de-sensitized attention in a way that the photograph from which they come never could. Here as well as in the hospital series, by doing the drawings and making them so large, Manigaud’s succeeded in imbuing the images with the power to shock anew.