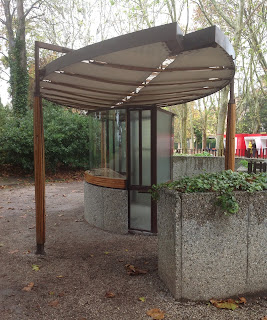 New to me too was the delightful Giardini della Biennale a public garden created by Napoleon who drained an area of marshland on the banks of the Bacino di San Marco. Aside from the welcome experience of open space, trees and grass—a rarity in this wonderful city, the gardens, which have been the site of the Biennale since 1895 (the Biennale of Art; this is the 13th architecture biennale), also boast, in addition to a central building, 29 permanent pavilions built by various countries to house their ongoing Biennale exhibitions.

These wonderful follies range from the Russian's stucco confection to the primeval modernism of Carlo Scarpa's Venezuelan pavilion, to the rustic blue Aalto-designed Finnish wooden bungalow and everything in between. Some, like the Russian and Finnish examples are folkloric representations of the country.

The Hungarian contribution has a distinct middle European quality, featuring elaborate tile work on its curved roof and a wide band of iridescent tiles adorning the entrance arch. I was drawn to these and then realized they reminded me of the two ceramic apples designed by Eva Zeisel that she gave me when I worked for her in the late 1980s. I recalled her telling me that in order to study ceramics as a young woman in Hungary she had to become a member of the tilemakers' guild (the first female to do so). It was a nice moment connecting the dots and thinking of her.

The American pavilion continues the nationalistic trend, a Jefferson knock-off in brick; it looks a bit like a rest stop off 95, or perhaps a funeral home somewhere in Virginia. The elegant Beaux Arts French building had a blown up photograph of a French housing project affixed to its façade as part of its Biennale exhibition providing a thought-provoking juxtaposition of the haves and have-nots.

Trust the Swedes, to come up with a daring eco-friendly design. Their sleek modern pavilion was built around four tall trees. Nature has been emphatically brought inside and we have the wonderful contrast of rough bark and smooth travertine and glass to feast our eyes on.

I liked both the Japanese and Israeli modernist buildings. The Belgian and Dutch are vaguely art deco, veering into Fascist, but I still liked them. I guess I’m just a sucker for small scale.

The almond shaped ticket booth is the best thing there. Designed by Scarpa, it is a perfect little gem.

As for the actual exhibitions: there were plenty of plans and models on view at the Arsenale that I’m sure an architect would pore over, but they were far too esoteric for me. At the Giardini, what struck me most of all was how much like art installations everything was. Many of the entries consisted of arrangements of works on paper: ink drawings, (nothing to do with architectural drawings), pastels, maps, photographs, etc. When models appeared they were most often in so many multiples that it was impossible to see the trees, just the whole forest. It seemed to me as if there was very little architecture at all except when used as reference point. One exception was one of the Spanish contingents which produced a Green housing development/village that resembled an Easter bonnet one might wear to PeeWee's Playhouse. It was actually quite ugly, but I admired the humor, audacity and considerable effort that went into it.

Posted by Sarah Sargent at 8:47 AM