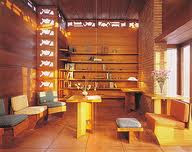 On Thursday I went to the Pope-Leighy house in Fort Alexandria, Virginia. It’s a Usonian house designed by Frank Lloyd Wright in 1941. I’m working on a piece on it, which will appear here in the future.

Posted by Sarah Sargent at 4:56 AM