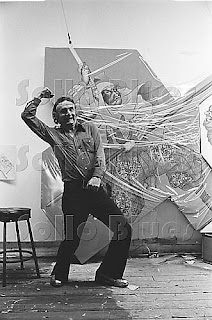 What was Larry Rivers thinking, filming his adolescent daughters naked or topless describing their developing breasts? The films, shot over the course of several years (every six months for over five years), are part of an archive purchased by NYU. The daughters, who say the films were shot against their wills, want the films; NYU says no.

Posted by Sarah Sargent at 5:44 AM