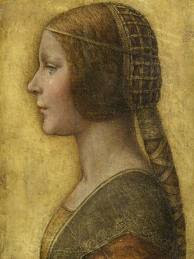 Last night I watched the PBS special La Bella Princepessa on a drawing some experts believe to be a Leonardo da Vinci. A beautifully executed portrait, the pen-and-chalk drawing on vellum, features lovely rosy and golden tones. One of the highlight’s of the TV program was watching a contemporary artist recreate it using authentic materials. She began with a vellum calf-hide, which she cut to size before sketching in the figure. It was trial and error to get the colored chalk to adhere to the vellum and she eventually resorted to using her fingertips to rub it on. Interestingly, there is a partial fingerprint on the drawing, Leonardo left prints on other works, which not only supports the likelihood of finding one here, but also provides an example of the real McCoy for comparison. In the end, the print from the drawing wasn’t extensive enough and the results were inconclusive.

The drawing’s story is the kind that galvanizes the art world. Purchased for a relative pittance ($21,850) in 1998 by New York dealer, Kate Ganz (who held on to the painting for ten years) it was eventually bought by Canadian collector, Peter Silverman who suspected it might be a Leonardo and sent an image of it to eminent Leonardo scholar, Martin Kemp.

Kemp noted "uncanny vitality" in the work and says, "I experienced a kind of frisson, a feeling that this is not normal." The vellum had been carbon-dated c. 1440-c. 1650, which was within the range of Leonardo’s dates. Intrigued, Kemp embarked on his own investigation using high-resolution multispectral scans. Studying the drawing in extraordinary detail, the evidence began to mount up. Kemp discovered many areas that seemed to confirm that it was a Leonardo, most notably that the artist of the drawing was (very unusually) left-handed like the master himself. Other aspects include: the precise lines and adept modulation of colors and the enigmatic expression that is reminiscent of Leonardo’s other muses: Mona, Anne, Genevra. Lastly, the sitter’s headdress belongs to the Milanese court of the 1490s where Leonardo was.

Because there are stitch marks on the edge of the portrait and vellum was used for books, Kemp theorized that the portrait came from a book that may have commemorated a royal marriage. (This might also explain why hidden within the pages of a book it remained unknown for so long.) Armed with this clue, further research led him to theorize the sitter was Bianca Sforza (Giovanni Ambrogio de Predis (c. 1455–c. 1508) painted a strikingly similar portrait, right down to the hair net, that's positively identified as Bianca), the illegitimate daughter of the Duke of Milan, who married Galeazzo Sanseverino in 1496. Her husband was not only commander of the Milanese troops, but most tantalizing, a patron of Leonardo's. Sadly Bianca, who was probably only 14, died just a few months after her wedding.

All this is very compelling, but there are experts who are not convinced that the portrait is by Leonardo and it was excluded from the blockbuster show now on view at the National Gallery in London. I have to say that while I think it is a gorgeous drawing by a consummate artist, it doesn’t look like a Leonardo to me. Now, I am no Leonardo expert, but his women are distinctly odd looking (it would be interesting to have a forensic facial reconstruction artist translate their features into “living” people to get a sense of odd they really are) and tend to look alike, probably because he used the same model. There are a couple of exceptions: The Lady with an Ermine (who kind of resembles Bianca) and his Portrait of an Unknown Woman aka La Belle Ferroniere. But even these have a stylized, almost archaic quality to their features. Not so the drawing, which not only looks like a real person, but possesses an ideal of female beauty that seems distinctly different from Leonardo’s. While there were contemporary artists who did paint beauties that look like actual people—Botticelli springs to mind—Bianca looks too pretty for Leonardo and too fleshed out, if you will, for the period. She’s more like a pre-Raphaelite glammed-up take on the Renaissance (though I’m not suggesting the drawing is from that era). Or I'll put it this way, if you asked Gustav Klimt to paint a by-the-book Renaissance portrait of a young girl, I think you'd end up with something like this.

It’s possible she was done by some other Renaissance artist or else is the product of an incredibly skilled forger. The multi-pronged expertise required to pull this off would be incredible, but with a potential $100 million payout it’s not completely inconceivable. While the evidence that points to Leonardo is manifold, for me it’s how something looks, it’s the ultimate test and all the facts in the world can’t take away from this. Just sayin’.

Posted by Sarah Sargent at 9:14 AM