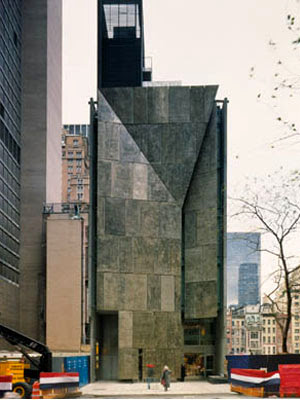 The eminent architect W. G. Clark has called the American Folk Art Museum building the most beautiful in New York. Designed by Tod Williams and Billie Tsien Architects it was completed in 2001.

Sheathed in bronze, the eight-level sliver of a building more than holds its own against the black glass behemoth to its right. On this block of megaliths, the human scale of the AMFA building offers a welcome visual respite. Its clifflike surface, which is pockmarked and mottled and looks both ancient and modern, presents a dynamic pattern of intersecting planes. A clever use of recessing creates a strong line bisecting the façade that culminates in a dramatic slanted V at the top, which expresses upward and downward movement simultaneously. All this dynamism adds lightness to a material that has a pronounced brooding intensity. Strips of glass on either side provide interior light without compromising the sculptural integrity of the façade.

Built by an overly ambitious board at a reputed cost of $32 million, the 30,000-square-foot building, beautiful though it may be, spelled trouble for the museum from the beginning. After years of struggle the institution finally threw in the towel, recently unloading the building to its next-door neighbor, MoMA, and retreating to its former home at 2 Lincoln Square where it pays $1 a year in rent to the Church of Jesus Christ of Latter Day Saints. Talk about a comeuppance.

Rumors abound that the AMFA building will be razed. Adding fuel to the fire is its location: right smack in the middle of MoMA and an empty lot where a proposed Jean Nouvel high-rise, offering condos as well as galleries for MoMA, is slated to go. But MoMA claims that it intends to use the AMFA building as gallery space. One hopes in its Yoshio Taniguchi-induced fog that it does. Designed specifically to exhibit art and a seminal example of Contemporary architecture to boot, it would make a most fitting location for MoMA’s architecture and design collections and a delightful palate cleanser amid a sea of glass.

Posted by Sarah Sargent at 7:57 AM