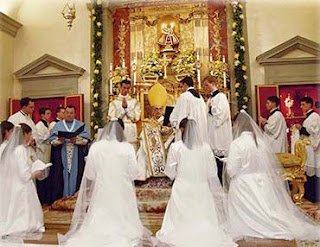 A couple of years ago at a friend’s house, I spied a sepia photograph of a bride on her wall. From the 1920s, it was very elegant; the bride wore a stylish dress and elaborate veil and was holding a large bouquet of flowers. It looked like an ordinary, if rather grand, professional wedding portrait and so I was taken aback when my friend told me it was a photograph of her great-aunt dressed for her final vows to become a nun. Now I had heard of the whole Bride of Christ notion, but I didn’t realize such extraordinary lengths were gone to with wedding portraits and tulle and such (the distinctly bridal First Communion get-ups I used to see in my New York neighborhood, notwithstanding). If I thought about it at all, I would have envisioned a simple white dress and veil.

I was convinced that if this family had such a portrait, others must exist and thought what an amazing collection it would make if one could assemble them. The exhibition and book possibilities made my mouth water. All these women…what were they thinking as they sat in their finery contemplating their futures? It seems incredibly poignant and I’m sure the photographs would reveal a rich mine of human emotion. Of course, trying to locate any photos has proved to be a challenge. Searches on the Internet have come up empty and I haven't even bothered with the Catholic Church knowing they wouldn’t be inclined to provide any assistance.

In recent years it seems the church has toned the fuss accompanying the ceremonies down considerably. But you can see how making such a to-do had been a brilliant move on its part, playing on every girl’s fascination with weddings. That a wedding (and most important, a dress) was still in the cards made becoming a nun so much more appealing and the bitter pill of entering a convent so much easier to swallow for everyone involved. It also helped secure the involvement of wealthy girls whom the church was known to target, since they’d have to sign over their inheritance. Members of this group and their families, in particular, were accustomed to marking life’s milestones with extravagant displays. The dress and ceremony would satisfy this requirement and the photograph would provide a lasting memento of the daughter who, in many cases, the family would never see again.
I still have hopes of finding a treasure trove of these portraits in the archives of some old photography studio. I would love to shine a light on them again for all to see.
Posted by Sarah Sargent at 7:21 AM