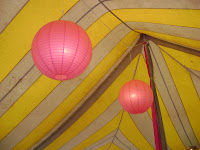 In case you hadn’t noticed, weddings are bigger than ever. There are three Say Yes to the Dress franchises on TV, the original at Kleinfeld’s (which is actually pretty good, providing little vignettes of people’s lives (the saleswomen, classic New York characters and the clients) along with some lip smacking style voyeurism) followed by ones from an Atlanta and a Beverly Hills store and a fascinating Reality TV offering from the UK that tracks over-the-top gypsy weddings.

Recently, my attention was directed to a couple of wedding planners’ websites which each feature slideshows of some of the weddings they have planned. It’s an amazing window into 21st century American civilization. It speaks volumes about our society. The weddings are beautiful, no question about it, with even the smallest detail whipped into shape. Each wedding is unique, boasting imaginative touches specifically tailored to a bride’s style. Yet, despite the beauty, something seems to be missing. The absolute perfection is suffocating and ironically, though the goal is hyper personalization, the weddings come across as incredibly impersonal.

Now I confess I am a little cynical about marriage even though my parents were happily wed for 64 years and were parted only by death. But, from where I sit with, apparently, a front row seat to Kim Kardashian’s shenanigans not to mention all the “Family Values” hypocrites (Newt, Vitter, Sanford, etc. You know who you are!) I have a right to be cynical. Personally, I think more people should focus on the marriage part rather than the wedding part, which as Kim K. and many others before her have demonstrated has become an opportunity for young women to play Queen for the Day.

Not so long ago before we all got so entitled, brides and their mother’s did their own planning, now, even the middle class hires wedding planners. Is it really that complicated? Isn’t it just like throwing a big party? It all seems a little spoiled and princessey to me.

I went to a wonderful wedding a couple of years ago, which was a haute WASP bohemian affair if you can imagine such a thing. It was at the bride’s family’s beautiful farm in Upstate New York. Exuberant controlled chaos is how I would best describe the affair. India played a big role in the festivities including the fabric for the dress and the bride’s jewelry; her family is in the textile business and all of them have spent a lot of time in India. The aisle for the ceremony, held in a field under an oak tree, was delineated using pots of dahlias, obviously just purchased at the local co-op. To keep the heavy blooms upright someone had lashed them to PVC pipe. They’d begun to disguise, the pipes, but time must have run out because not all of them had been camouflaged and the pots were mis-matched. There must have been 300 guests. To accommodate them all three non-matching tents had been set up haphazardly on the lawn, which was on two different levels. The tents were decorated with yards and yards of Indian fabric. Let me tell you they looked fabulous, large pink paper lanterns were suspended from the main one, which glowed with lovely, warm light. At the reception there was an attempt at a Virginia Reel accompanied (not very well) by the bride’s uncle on the bagpipes, the food on grills was unevenly cooked. But the band was great, the wine (private label) flowed and the colorful guests whooped it up. It was one of the best weddings I’ve been to I think because it wasn’t a hermetic ideal, nor was it an event that’s ultimately about reliving the past (through the glamorous photographs) in the future and gaining an edge with your peer group. No indeed, this wedding was relaxed, joyful, in-the-moment and exceedingly personal. And that my friends, is the definition of real class.

Posted by Sarah Sargent at 9:20 AM