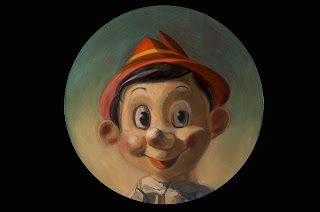 I went to the Athenaeum in Alexandria, Virginia this week to see Megan Marlatt’s show, Molded from Complicated Mixtures, which includes her tondos of various cartoon characters, and drawings and large-scale paintings of toys.

You can tell from looking at the work that Marlatt has a really good time making it. There’s a joyful exuberance that shines forth from each piece. Painted in oil in an Old Master style and using a shape usually reserved for religious paintings, the tondos of Olive Oyl, Pinocchio, Captain Hook and others are both spare and rich, funny and serious. Though her tongue is firmly planted in her cheek, Marlatt knows when to pull back. Her images never devolve into the overly cute level of dogs playing poker in the back room. Part of this is her restraint, part of it the beauty with which they are rendered and part is because there’s frankly, something a little creepy about the vintage puppets with their just a-tad-too-jovial expressions she uses as subjects. Marlatt is well aware of this and uses it to her best advantage.

As far as I’m concerned there are two real stars of the show. Portrait of Pinocchio is one. There’s something about the position of the figure, the palette and the retro lighting that makes this painting so very appealing. Though it has already grown a bit, Pinocchio's nose looks twitching and ready to shoot out some more. (It's a nose that vies with Ghirlandaio’s for most nasal character in a painting.) Coupled with the mirth in Pinocchio’s eyes, these two features convey perfectly the mischievousness of this most famous junior prevaricator.

I also love the three-quarter view Portrait of Ms. Oyl. Again, the lighting and palette are superb. The sitter’s position is what gets me. It recalls the glamorous studio portraits by say a Horst of some starlet or other. Here, this “glamour shot” perspective adds a poignancy to Olive Oyl’s image because she’s such an ugly duckling, clearly doesn’t know it and is reveling in her movie star moment.

Special mention must go to the Portrait of Ms. Oyl as a Rembrandt, which Marlatt said was inspired by a real Rembrandt of a woman who resembled Olive Oyl. It was perhaps natural for Marlatt to take the work to this point and she almost goes too far into the poker playing dog realm. What saves it is the incredible Rembrandt-like virtuoso painting of the ruff and the laugh-out-loud bulbous shadow of Olive Oly’s nose falling upon it.

Marlatt has been painting mounds of toys for several years now. They are fun to collect, fun to arrange and fun to paint. Large assemblages are both visually interesting but also offer so many opportunities to flex one’s artistic muscles painting soft and hard, shiny and dull, masculine/feminine, animal/machine and so on. Plus there’s the eye-popping color that comes with the territory. (Marlatt uses acrylic in addition to oil paint because she simply can't reproduce the toy's colors with oil alone.)

But fun aside, by focusing on toys Marlatt forces the viewer to confront other issues. The jumble she paints seems to reference the chaos in our personal over-stimulated lives as well as the larger conflict-ridden world. The junk heap of cast-off toys points to our consumer culture where endless giant container ships arrive bearing fodder for the yawning shelves of Walmart and Toys R Us. The toys are both ephemeral and permanent. Interest in them is short lived—the child grows up and moves on, yet the toys are made from materials that will never degrade, ensuring we’ll be stuck with them for eternity.

My favorite is Orange Slinky whose luscious DayGlo slinky of the title commands front and center attention. There’s so much here to look at and enjoy in the busy snarl of toys at the bottom of the painting. A riot of color and form, it’s tempered by a refreshingly empty background. But empty is not boring and here the layers of hue that produce the shimmering pink and the prominent brushstrokes create a stand alone authority that holds its own against the more clamorous toys.

Marlatt’s work is so satisfying on so many levels. A storyteller, art is her medium and her passion. Though her work is not as overtly political as some, she is concerned about the human condition and the current state of the world. She confronts these issues gracefully with beautifully painted images that are rich in humor and metaphor.

Good news for all you locals: Megan Marlatt will be showing this body of work at Les Yeux du Monde in January, 2011.

Posted by Sarah Sargent at 8:17 AM