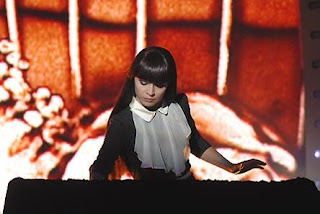 I couldn’t sleep last night and for some reason thought again about the amazing sand animation portraying life during the USSR’s Great Patriotic War against the Third Reich in World War ll (in which it's estimated that 20 -30 million soldiers and civilians died) Ukrainian sand artist, Kseniya Simonova that went viral on the Internet last year. If you missed it, it's worth a look:

It really got me thinking about High Art vs. Low Art because it is so appealing, beautiful to watch and very moving. It shares some compelling similarities with William Kentridge (chronicling potent episodes of human suffering, whether through political oppression or war with graphic images that shift from one to another by “erasing” and “re-drawing.” Granted Kentridge is really drawing and erasing, while Simonova is moving sand around—with incredible control I might add. And lastly, both artists use powerful musical scores to add dramatic effect.) Yet, I hesitate to put them in the same league. There’s something undeniably Vegas about Simonova’s work. First of all the setting, Ukraine’s Got Talent screams show biz, and Simonova is almost too perfect: show girl-gorgeous with a dancer’s grace.

Though she manipulates it masterfully, the medium is undeniably gimmicky in a David Copperfield, sleight of hand kind of way. A quick survey on the Internet shows that there are other (less comely) sand animators out there and though it looks hard, Simonova only took sand animation up a year before the video was shot. Meanwhile, Kentridge has been practicing his oeuvre for years. His pieces are much more labor intensive, requiring hundreds of drawings and stop-and-go animation. While he works, he is making countless artistic decisions; Simonova’s work is more about chance. At the end of the day, Kentridge has something to show for all his effort whereas Simonova’s work is completely ephemeral. True, videos exist, but they aren’t part of the piece, just a means to record it. Not that there’s anything wrong with this, much of conceptual/performance art is ephemeral, but Simonova’s goals seem different from those artists.

That said, I love to see Simonova at work, watching her fingers tease recognizable objects out of the sand (not so unlike Bob Moss, who I’ve always found somewhat irresistible) and I admire her dramatic flair when at the climax she throws sand across the light board to evoke exploding bombs. One only has to see the audience’s reaction to grasp how effective Simonova is.

And as for Ukraine's Got Talent? Not surprisingly. she won.

Posted by Sarah Sargent at 7:59 AM