Taken by Surprise: Recent Works on Paper and in Oil by Dean Dass 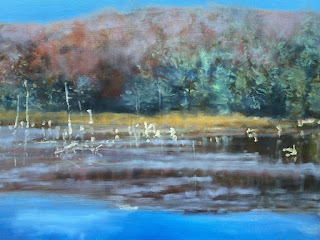 In September 2018, Dean Dass made a pilgrimage through northern Michigan into Ontario, following a route that paralleled the one taken by the Group of Seven. Like Dass, this cohort of Canadian artists was drawn to the particular qualities of the north, its rugged austerity, subtle palette and distinctive light. And like him too, they were influenced by the Nordic artists Edvard Munch, Jonas Heiska and Akseli Gallen-Kallela, artists whom Dass has been studying for 25 years. There is something undeniably elegiac about the landscapes Dass painted after the trip. The works created by the artists who came a century before were essentially tributes to the scenery, but Dass’s images of pristine nature are loaded. We cannot look at them without being reminded of how threatened such places are.

Dass’s body of work follows two distinct directions. There are the exquisite, lush renderings of rivers and forests in oil. And then there are the ethereal, stylized pieces on paper that appear both ancient and contemporary with their heavily worked surfaces that incorporate such organic materials as graphite, gold leaf and mica together with washes of pigment. Dass considers these two approaches closely aligned and part of a unified continuum.

You can see this alignment in his recent abstract (but based in reality) paintings, Fireflies and Seven Clouds. Fireflies is a painting of a photo of a television screen paused on a sci-fi film, while Seven Clouds, features luscious earth-tone shapes that derive from video game stills set against an inky backdrop. Both paintings are based on early collages included in the exhibition, Räjähdyksiä Maisemassa (Landscape with Explosions), Galleria Harmonia, Jyväskylä, Finland. “I want these kinds of paintings to do two paradoxical things simultaneously,” says Dass, referring to the pleasurable visceral reaction to an aesthetically appealing composition that’s also tinged with unease upon contemplation. “So that we’re stuck vibrating in the connotative space between two terms.”

Dass is enchanted by the nesting fish which abound in the creek that flows by his house. This little stream runs into the Mechums River, which Dass has painted for over 20 years. The Mechums goes into the James and the James, into the Chesapeake Bay and thence to the ocean. In the passage of water and fish, one could say Dass is “Looking upstream, maybe in the sense of looking further, more closely, into the depths as it were.” In Chub, he uses gold leaf for the little fish, capturing the effect of sunlight hitting their silvery skin. In the almost abstract work, he fractures the mandala—an image of truth that recurs in Dass’s work—transforming it into something entirely different. In this case, “a joyous little swimming creature.”

Dass uses his practice to explore, not just the media he uses, but to take deep cerebral dives into history, mythology and philosophy. “I am interested in asking what do we see,  what do we know, what do we understand?” he says. Having come to painting at the age of 40, Dass brought with him the methodical, process-rich approach of the printmaker he’d spent the first part of his career being. Dass is constantly exploring new and old media and techniques. His glazes are the same ones used by northern Renaissance artists and yet, he is not averse to using an inkjet printer. He works with intention, but also leaves things up to chance, allowing media to mix, and ebb and flow on their own.

Dass’s landscapes are mysterious and romantic. He captures the elements of water and air with extraordinary sensitivity. Just look at the limpid stretch of olive, steel gray and black in the foreground of Chippewa Falls. The river comes alive in his hands—you can almost hear it, feel it and smell it. Or, the way sunlight filters through leaves or branches creating coronas of yellow, pink, or orange radiance.

In Bog Near Sault Ste. Marie, Dass has dotted the water’s surface with bold squiggles of yellow pigment to indicate sunlight dancing off water. But, the marks also jar us out of our complacent perception of a scenic image into a more profound appreciation. It’s part of what Dass is after when he says he wants landscape painting to take the viewer by surprise. Or, to extrapolate from German philosopher Theodor Adorno, to engender a “shudder” in the viewer. This involuntary, primal response is similar to the awe and fear central to the 19th century notion of the Sublime. To convey this, contemporaneous painters chose as subjects places of natural magnificence, which helped hammer home the point. Dass prefers more low-key settings. In both works on paper and in oil, Dass finds the awe, the shudder, and he ensures that we find it too.


Catalogue essay commissioned by Dean Dass and Les Yeux du Monde gallery, Charlottesville, Virginia. Supported in part by UVA Arts & the Office of the Provost & the Vice Provost for the Arts.
Posted by Sarah Sargent at 8:15 AM