No Ordinary Moments: Visit to EMMA 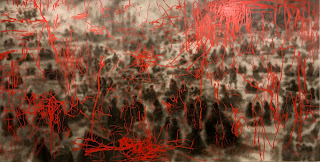 EMMA, the Espoo Museum of Modern of Art is located in Tapiola in the suburb of Espoo, a short subway ride from Helsinki on one of its spotless and punctual to a fault, tomato red trains. You know you’re at the right stop when you step off the train and are greeted on the platform by Emma Leaves a Trace, a monumental white sculpture. Kim Simonsson’s sculpture is actually bronze painted completely white except for one hand that’s splashed with color. Blotches of the same colors. suggesting the girl’s handprints, appear around the station. There are also a series of digital animations showing the girl’s mischievous antics as she paints the streets of Tapiola in rainbow colors.

The largest art museum in Finland, with over 50,000 square feet of gallery space, EMMA is housed in a former printing company designed by Aarno Ruusuvuori (1925–1992) in 1967. A classic example of 1960s brutalism, the concrete building is a long, low rectangle. From the outside it’s a foil to its woodland setting, and inside, it invites those woods in, thanks to the windows running along the rear wall. This inclusion and reverence for nature is very much part of the Finnish ethos where modern design and nature happily coexist.

You enter the museum on the ground level where the café and shop are situated. Out back behind the museum is a Futuro House. Designed by Finnish architect Matti Suuronen (1933–2013) in 1968, the living structure was made out of fiberglass-reinforced polyester plastic. It looks like a flying saucer. The one at EMMA is bright yellow, but they came in a variety of colors—white, orange, blue. One can picture it in a snowy landscape out in the woods or in the desert looking quite cool. Unfortunately, Suuronen continued his UFO-theme inside with a row of ugly bucket seats ringing the edge of the main circular room. I kept thinking how much better it would be gutted and filled with natural materials. This also might have helped alleviate the peculiar odor—possibly plastic degrading that made lingering inside for any length of time impossible. Still, the inclination for a small modular house was spot on as evidenced by the explosion of the tiny house movement today. Of the original 100 Futuro houses that were made, only around 60 survive. Several are in the U.S.

Back in the museum building and up a flight of stairs are the main exhibition galleries. Here, the ceiling is suspended from eight massive columns; there are no structural walls, so the enormous space can be easily manipulated to accommodate different types of art and exhibitions. It feels both expansive and intimate, with a warmth and graceful flow between spaces.

No Ordinary Moments, a curated exhibition of Finnish and International works from the museum’s collection of contemporary work required large open space to display the work. A retrospective of the work of Merit Oppenheim occupied a suitably scaled area of intersecting spaces, situated away from the windows, towards the center of the building. Softly lit and rather cozy, it really enhanced the experience of looking at this type of art. In one or two instances, in this show, the exhibition areas had been delineated by many strands of fine twine hung from the ceiling to form a “wall”, which was both exceedingly beautiful and also afforded a cheap solution to separating space.

No Ordinary Moments provides a wealth of new discoveries. With the exception of Olafur Eliasson, not one of the other featured (mostly Scandinavian) artists was familiar to me, but boy was I impressed by the caliber of their work. The very first piece, Apokalypsis 1918, Hennala 4 (pictured) by Heikki Marila is a commanding piece by any standards. From a formal standpoint the painting has enormous presence with frenetic red scratches and squiggles covering a soft monochromatic background that could almost be photographic. Violence and blood are suggested by the strident overpainting and one begins to see the mounds and shapes as people. This is as it should be for the painting references the Hennala prison camp. Originally built as a garrison, during the Finnish Civil War, it was turned into one of the most infamous prison camps of the conflict.

Crystalline and shiny mirrors have a spare purity that is endlessly appealing. Olafur Eliasson uses them for their reflections but also for their lucent quality which references elements—water, air, ice that are the frequently his subjects. His Pentagonal Mirror Tunnel is composed of five round mirrors on stands facing each other in a circle that suggests a cosmic arrangement. Stepping within the circle, one begins to see the infinity tunnel phenomenon of the title. But more interesting, is the cubist effect of the reflections. These visually fragment the mirrors, producing intersecting planes and discombobulating the viewer’s sense of space.


Julian Opie’s striking Woman Walking in the Rain with a Headscarf has a graphically bold composition and snappy Good N’ Plenty palette. Opie is known for his highly stylized versions of ordinary people walking on the street. In his animated versions, he pairs an anonymity and emotional blandness—the faces are usually circles—with lifelike movement for a curious effect. Here, the hijab adds a charged poignancy to the composition.

I was drawn to Irmeli Hulkko’s Variable by her combined use of linear and painterly approaches makes for an interesting dialogue between the two, but also the spindles and lines floating “above’ the background enable her to create an illusion of space within a nonobjective work. She allots equal weight to each approach and also manages to integrate them to produce a cohesive whole. Hulkko’s unexpected palette of watery yellow and gray with a dash of Kelly green was curiously appealing.

Denise Grünstein’s creepy video All Flesh is Grass features a man dressed in a suit, standing in front of a table—you only see his chest and arms—his head is out of the frame. The interior, the figure and the quality of the light recall a Vermeer. Soon a tress of strawberry hair falls on the table in front of the man. Several more begin to drop slowly at first and then more and more frequently larger clumps of hair begin to fall. Pretty soon there is a horrifyingly large pile of hair accumulating in front of him. Throughout it all, the man continues standing there, his hands resting on the linen table cloth.

Saara Ekström’s large format color prints are simply luscious meditations on form and color. Method of a Cloak and Brim were irresistible with their acid 1960s Cadillac palettes and inspired pairings of objects.

Tina Heiksa’s little gem From the Series Pink Coat reminded me a bit of Gerhard Richter’s blur paintings. Heiksa renders the coat with such audacious confidence—the forceful stokes of paint on the left forming the edge of the garment and the left sleeve, and then, the swirls of paint that form the folds on the other side, are marvelous examples of control and panache. Other areas to admire Heiska’s talent are the sheen of the hair, the light on the shoe and the way the window in the background is created through gradations of color.

From high on a wall in one gallery, Pauliina Turakka Purhonen Kibitzer (a sewn and embroidered head of a woman) stares down at the viewer. There is something ancient, earthy and Northern European about her, like a creature out of folk lore or an extra from a Hieronymus Bosch or Bruegel painting. But the material, technique and her disembodied state is decidedly contemporary. I noticed when I enlarged the photo I took that there are tears falling from her rather manic eyes.

It was such a refreshing experience to step into this previously unknown to me corner of the world and fine such a high level museum filled with such exciting work. When the art world has been distilled down to a few huckster technicians that seem to grab all the attention, it is wonderful to discover not only many, many strong artists, but an institution that is willing to support them.
Posted by Sarah Sargent at 2:32 AM