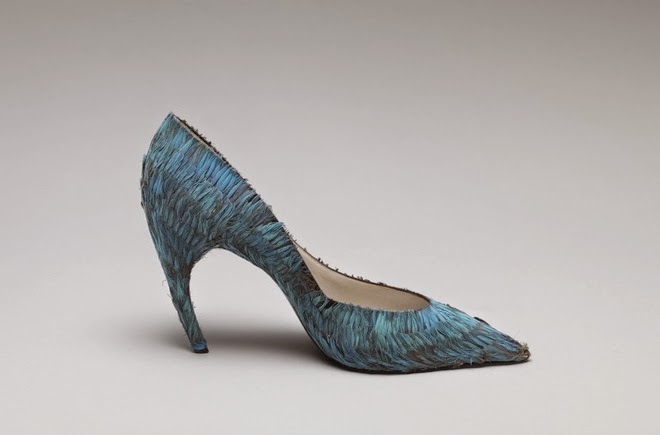 There are two take aways from Killer Heels on view at the Brooklyn Museum. One: women's shoes through the ages have been designed to keep the wearer down: trammeled and unbalanced in teetering pinnacles. And, two: everything old is new again.

Now, I like my heels as much as the next girl, even if that girl happens to be Carrie Bradshaw. I trace my obsession with shoes to when I was six. We had just made the annual pilgrimage to Best & Co. to buy our school shoes. The following day, I was sitting on our front stoop while my mother swept the sidewalk in front of our brownstone. Because I’d outgrown my sneakers, I was wearing my brand new oxfords. Back then things were simpler and also more complicated: us kids owned just three pairs of shoes: sneakers, school shoes and party shoes. Stores were more specialized — I don't think Best & Co. carried sneakers; we bought ours, like everybody else, at Melnikoff's on York Avenue and this entailed a separate shopping trip. My de rigueur party mary janes, which would have come from Best's, hadn't been purchased yet, perhaps because my party going needs weren't pressing and with the sticker shock of outfitting four children, my mother put off that purchase for another day.

In any event, while my mother wasn't paying attention, I took off my new shoes and put them on the steps beside me. Being six and easily distracted, when I got up and went inside, I left them behind. By the time my mother realized what had happened and ran outside to retrieve them, they were gone.

Of course, I was roundly scolded for being so careless, but the real punishment came when I was forced to wear a pair of white drum majorette boots with red tassels, part of a costume of my sister's, the only footwear that fit me. The problem was it was a Sunday and in the 1960s shops were closed on Sundays. It wouldn't have been so bad if we were going to spend the day at home, but we'd been invited to a barbecue on Long Island and so my humiliation at having to wear the horrid boots was public. Clearly, it made a lasting impression on me for I now possess the perfect shoe for every occasion.

But back to the Brooklyn show. Here, the emphasis is on the exotic. There's everything from the elevated 11” wooden Nalins Ottoman Empire ladies wore in the baths to keep their feet high above the water, to the most outrageous contemporary designs.

The show provides a heavy dose of fetishism, with plenty of stilettos and lots of boots. One pair, red and black high button boots from 1900, would be quaint except they're thigh high giving off more than a whiff of gilded age burlesque. There's a clip from a Betty Page film which shows her hobbling around in a pair of impossibly high — nearly vertical — pumps that, oddly, appear two or three sizes too big for her judging from the gap at the back. This kind of outré heel is seen in quite possibly the most extreme pair in the show: Christian Louboutin toe shoe stilettos, Fetish Ballerinas. God, they were weird.

There are plenty of other bizarre examples like the pair of high heeled booties made using real horses hooves that look like they clopped right out of a Matthew Barney video, a Japanese black lacquer platform thong sandal called a geta that forces the wearer to adopt a halting, dipping, figure-eight gait as seen in clips from Sakuran and Memoir of a Geisha projected on a nearby wall.

There are numerous sculptural and architectural examples including a bamboo and plastic wedge by Winde Rienstra that could almost stand alone as an art object and a silver pair designed by Zaha Hadid which would make you look like you were walking around with a couple of her buildings on your feet.

Heelless heels have been a popular design since the 1930s. There’s a beautiful red and gold kid pair by Delman (1938-40) and a red suede sandal from 1940. Both look incredibly chic and modern. But apparently the practice of undercutting the heel goes back much further being evident in chopines from the 16th century. A steel cantilevered heel was actually patented in the 1950s. The most dramatic version of this design on view is Noritaka Tatehana’s austere and quite beautiful, faux leather heelless platform bootie. According to the label, the footwear represents his response to the 2011 earthquake in Japan. Hmmm. But if you find this a stretch, there’s a second design by Japanese/British artist/designer Sputniko! entitled Heeling Fukishima (Nanohana Heels). Adorned with flowers from a plant whose seeds absorb radioactivity. The seeds are stored in the spike heel and sowed as one walks. Giving the shoe a steampunk quality is an antiqued brass circular mechanism on the side, perhaps a Geiger counter? Another Japanese designer, Masaya Kushino continues the trend of shoe as art. His Stairway to Heaven, an elaborate lace-up, cantilevered wedged bootie, features outstretched crows’ wings at the ankles, their considerable span making it impossible to walk.

Beth Levine’s rolled heel slingback from 1962, Chanel’s light bulb heel, Prada’s Cadillac inspired mules all show that beauty and a sense of humor can co-exist. I wonder where the shoes with the hollow Lucite heels in which you were supposed to put live goldfish into were? Or perhaps that’s an urban myth?

For me though, elegance rules. My two favorites pairs were relatively tame. A black and gold brocade wedge by Christian Siriano and a kingfisher feather (sorry about the kingfisher) Roger Vivier “choc” pump, a re-issue from a 1959 design created for Christian Dior.

Notably missing from the show was Alexander McQueen’s Armadillos, not that I object as I see nothing redeeming about them except that they might have provided the inspiration for Leanie van der Vyer’s film, Scary Beautiful playing on a continuous loop.  In the film, a woman straps herself into a pair of grotesque acid yellow leather boot-like containers with enormous backwards-facing heels. She then struggles across the room, her body contorted by the weird and hideous footwear. It was a tribute to the overall strangeness of the actual footwear on display that a woman next to me remarked on the ones in the film in a way that indicated she thought they were real.

Posted by Sarah Sargent at 4:58 PM