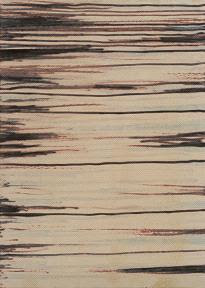 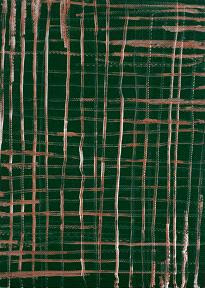 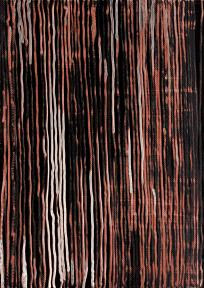 Once again the pickin's were slim at the Armory Show where I could count on almost just one hand, the artists I admired. But I'm in the minority, judging from the masses of super serious, blinged-out people there lapping it all up. On the whole, it was a case of bad ideas, badly executed. A number of big name galleries were absent and favorites of mine, Lisson and White Cube from London, had nothing really to write home about—though I liked the Andreas Gurskey of Niagara’s Maid of the Mist. The reliable Sikkema Jenkins didn’t come out to play, but stayed put at their space in Chelsea. I high-tailed it over to the Paul Kasmin booth hoping for a Walton Ford fix and was rewarded by a rare dud of his. Even Pierogi 2000 failed to impress this time around.

There’s a lot meant to shock, but it just ends up being boring. I’m thinking of the 30 plaster heads of Osama bin Laden by Wang Du at $15,000 a pop or $320,000 for the lot. Then there’s Jota Castro who uses handcuffs (actual ones and photographs) in various prurient ways. For real shock and awe, I suggest he take a look at Catherine Opie’s truly enthralling photographs of Ron Asthy, which (one can hope) might encourage him to hang up both his camera and handcuffs. Andreas Serrano’s contrived photographs of toy figures in silhouette reminded me of the equally dull James Casebere’s toy houses that he photographs in real landscapes. I swear the exact doppelganger of Ai Wei Wei’s polyhedron is in the window of my local Urban Outfitter. I don’t care if it’s hand carved, Ai’s got studio assistants up the wazoo to do the carving for him.

Special kudos go to the revolving group of women dressed in lab coats taking turns lying on a slab with a jagged hunk of quartz suspended millimeters above their foreheads. I actually saw a man cross some kind of line and touch one of these intrepid women, which reminded me of the groper at the Marina Abramovic show who was ejected and permanently barred from MoMA after pulling a similar stunt with one of the nude participants in her piece, Imponderabilia. People were delighted by the piece at the Armory Show, madly snapping pictures of them the whole time. But really what was the point?

I’m tired of seeing one-trick ponies that pop up in more than one booth and in show after show: the aforementioned Casebere and Kehinde Wiley—whose heroic super-realist portraits of black men on highly-patterned backgrounds I liked the first time I saw, but now they’re sameoldsameold.

Without a doubt, the most startling artist at the fair would have to be Mary Reid Kelley. There was something a little too slick about her drawings, but her video, The Syphilis of Sisyphus was jaw dropping. Reid Kelley plays Sisyphus a “grisette,” (French working class woman). The action begins with Sysyphus pondering the fate of woman as she sits at her dressing table and ends with her being dragged off by the "Morals Police," to the infamous Salpêtrière Hospital where women were “treated” for hysteria. Joining her in the performance are four Pierrots (played by Reid Kelley’s family members) who also assume other roles along the way. Reid Kelley employs antique costumes and painted set designs that look like they come from the dawn of cinematography, The Cabinet of Dr. Caligheri or Nosferatu. Her highly articulated make-up and weird black eye covers are downright creepy, evoking simultaneously a death’s head and also somehow not. It’s a wonderfully odd mix of serious, stylish and screwball. Retro and yet contemporary.

Watching the video, I felt strangely out of control, hijacked into some weird netherworld. It was like a bad acid trip in a good way. My one complaint is that I found her flat, girlish voice a little jarring and at odds with the dark intensity of her video. Reid Kelley is a recent graduate of the MFA program at Yale. She is one to watch.

Yang Jiechang’s series of paintings, Tale of the 11th Day, resemble traditional Chinese screens. On closer inspection you realize there’s a whole lot of monkey business going on between different species and between humans and animals. But the bestiality is presented in the same restrained manner as the landscape and adds a dash of spice and outlandishness to these otherwise austere works.

London-based Israeli artist, Gideon Rubin uses a subdued palette of olives, beiges and mauves with wonderful painterly brush strokes to produce curious and compelling paintings. His work has a 1940s aesthetic, recalling old sepia snap shots. What is most distinctive about his work is that he leaves the faces blank. Particularly effective was the girl on skis sitting in the snow and a whole group of small portraits hung in grid fashion, next to each other. Despite their featureless faces, Rubin successfully conveys each subject's individual character.

I think my favorite artist at the show was Mike Bayne, a photographer (Nope he's a painter see comment below.) This makes me like him even more I had never heard of. He paint incredibly realist paintings of sad-sack neighborhoods and down-at-heel commercial strips. Bayne doesn’t go for big statements; he seeks out the ordinary, everyday things anyone anywhere could see: a tawdry motel sign or rundown ranch as opposed to attention grabbing glitz or nifty visual sights. But Bayne’s little gems do grab your attention. It’s all about composition and scale. Bayne frames his work really, really well and they’re diminutive (5” x 8”?), which for me works as well as large format as far as photography’s concerned.

This is the third year of the Armory Focus, which devotes a section of the Armory Show to an important arts community. This time, the attention turned to Denmark, Norway, Sweden, Finland and Iceland. Included in the line-up was a conversation between visual artist Ragnar Kjartansson and Bjork, which I am sad to say I missed.
Two Nordic pieces confront you straight off the bat: Kjartansson’s divine 40-foot-long pink neon sign that reads “Scandinavian Pain." Funny and poignant at the same time, it’s suspended above the bar where you can purchase an $18 flute of champagne. Scandinavian Pain was acquired from the show by Sweden’s Moderna Museet where it's rumored it will be placed on the top of the museum building. On entering the Armory Focus area you soon become aware of a whooshing sound, almost like the surf, but one having an extra long pause between waves. It’s Helsinki-based artists Tommi Grönlund and Petteri Nisunen’s Wave of Matter. The piece consists of a table-like platform that holds hundreds of tiny ball bearings on its surface; as the piece tilts slowly back and forth the balls roll across the surface creating the sound. It’s mesmerizing to watch and listen to.

Just based on his materials—light glass, water—you’d know Olafur Eliassion came from Scandinavia. His slices of colored glass, two in each arrangement, are set atop pieces of driftwood. The glass is different colored, forming a solid hue. At the edges,where it doesn't quite overlap you see the separate colors. They’re luscious to look at, unsettling because they appear to be so casually placed on their narrow "shelves," and texturally interesting: the shiny, sleek glass contrasting nicely with the dull, rough wood.

One entire wall in this booth was taken up by the work of the late Icelandic artist, Birgir Andrésson. Like over-scale paint chips, his paintings of pure color feature the name of the color printed across them. One series, different variations of grey, seemed to comment directly on Iceland’s potential for bleakness. But the work is much more than this, referencing a “blind reality” that Andrésson was only too familiar with having been born to blind parents.

Over on Pier 92 was the Modern section. There I saw a nifty blue slit canvas by Lucio Fontana whom I had only recently been introduced to at the Suprasensorial show at the Hirshhorn. Here, also was Gerhard Richter’s Abstraktes Bild, yours for a cool $13.5 million, and a not very good, but interesting because it was so uncharacteristic, abstract painting by Chuck Close.

I was lucky enough to meet up with a well-connected art dealer friend who had been invited to parties hosted by the consular generals of Finland, Norway and Belgium at their uniformly splendid apartments. (Not being a Nordic country, I surmise Belgium jumped on the Armory bandwagon purely because, unlike here, art is important in that country.) The work at the Finnish apartment was the most impressive with a number of interesting artists: Hanna Väisänen, Susanna Gotteberg, Margatta Palasto, Raili Tang and Robert Lucander whose triad of paintings Harmaa, Tummanvihreä, Musta (Grey, Dark Green, Black) 1993 (pictured) with their brooding, spare yet dense presence were the best thing I saw in New York.

On the Norwegian Consular’s terrace we were treated to one of the most spectacular moon rises I have ever seen: a great orange orb that matched exactly the lights on the warehouses of Queens, rising slowly above the East River. Framed by tall buildings, city lights and water, it was breathtaking.
Posted by Sarah Sargent at 12:00 PM