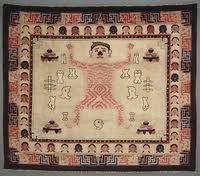 I love stumbling across something unexpected in a museum, which becomes a door to a whole new, unexplored world. At the Metropolitan last week while in the Asian wing admiring the matinee idol Buddhas from Afghanistan, I overheard a docent tell her tour group that they must see the exhibition of Tibetan rugs. She said it was a once in a lifetime opportunity to see them all together.

Intrigued, I climbed up through the carved Indian temple to the upper gallery where the rugs were displayed. The small, but dense exhibition focused on Tibetan Vajrayana Buddhism, exploring the role ritual objects played in the advanced sect of Buddhism that flourished in Tibet 8th-20th centuries. On views, in addition to the tantric ritual rugs, were utensils—including knives, vessels, fire-offering ladles, ritual staff and daggers.

There were several rugs featuring tiger skins. I have seen plenty of modern versions. I never realized they were anything other than trompe l’oeil, less expensive takes on the real thing. It turns out they are ritual rugs representing the flayed skin of the animal. More surprising were the human versions of the rug. The one I have pictured featured a flayed man (who reminded me of an E.C. Segar cartoon character with his bedhead hair and clown-like (amputated?) nose) the red stripes on his flesh indicate arteries; he is surrounded by his bones with his skull between his legs. The border is made up of severed heads. It's very handsome, if one can get beyond the subject matter, with its archaic stylization and subtle hues and I can see why it would appeal to its owner, the former British Contemporary Art dealer Antony d’Offay who appeared to own most of the items on view.
The gruesomeness seemed totally out of sync with what I know about Tibet and Buddhism, which granted isn’t a whole lot. The accompanying text was pretty vague as to whether the flaying/deboning/decapitating actually took place (one would assume it did at one time) or if it was ritualized. (There was mention of life-sized human effigies.) But whether real or ritualized, the point of it was to celebrate detachment from the corporeal body, removing obstacles, specifically the three poisons: Ignorance, Delusion, Greed that stand in the way of enlightenment replacing them with Good, Wisdom and Compassion. While the means may have been extreme, the goal is admirable. When I look around at the world these days, I can see that it is truly poisoned by the former triad. As Gandhi said: “Be the change you want to see in the world.” And so I will strive each day for the latter through deeds and meditation. You?
Posted by Sarah Sargent at 8:24 AM