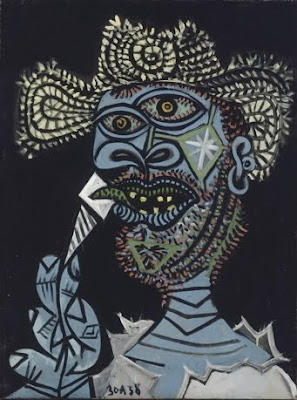 The Virginia Museum of Fine Arts scored big when they nabbed the collection of the Picasso Museum in Paris, which needed a temporary home during building renovations. I saw the collection in Paris many years ago. With my focus on Cubism and thanks to a Picasso coloring book I was given as a child, I dismissed much of Picasso’s other work as trite or as trying too hard. (Ah, the callowness and arrogance of youth!) I enjoyed my position of contrarian and proud New Yorker that I was, I knew many of Picasso’s masterpieces resided in my hometown: Les Demoiselles d’Avignon, Three Musicians, Girl with Mandolin, Ma Jolie. Indeed from my perspective, the city seemed lousy with Picassos. Twice I had had the good fortune of visiting the Victor Ganzes’ expansive collection on tours conducted by Mrs. Ganz herself in their sumptuous Gracie Square apartment, where several works are actually personally dedicated to the couple, souvenirs from their visits to Picasso's villa, La Californie. The Ganzes owned La Reve which Steve Wynn subsequently acquired and famously put an elbow through in 2006 just prior to completing a deal to sell it for $140 million. (I just read an account of the incident written by Nora Ephron where she erroneously alludes to the Ganz apartment as "small" and implies that the Ganzes were church mice along the lines of the Vogels. This is nonsense; they had plenty of money. Victor Ganz ran the family's very successful costume jewelry business and the Ganzes' apartment was a very grand duplex overlooking the East River in the same building that Gloria Vanderbilt lived in.) When the Ganzes' collection, which the couple bought for less than $2 million over the course of their lifetimes, sold at auction in 1997 for over $206 million (a return of over 10,000%) it was the largest private collection art sale in history.

Aside from the eye-popping work on the walls, I remember that as we mounted her gracious stairway to the upper floor, Mrs. Ganz allowed as how she always walked on tip-toe when climbing stairs to ensure shapely legs. She also said her daughters (alumnae of my school, hence the entrée) referred to one of his great portraits of the ‘30s hanging in the grand salon as the “Saks Fifth Avenue portrait” because of the resemblance of the cross-hatched pattern in one area to a SFA shopping bag.

When a friend invited me to the Picasso show in Richmond, I was delighted to go on an outing with him, but I didn’t hold out much hope for the show. Even though I had seen the collection, I had retained the false impression that it consisted of the dregs, works that were left lying around the studio at the time of Picasso’s death.

Boy was I wrong. The show is totally inspiring. I wonder whether viewing the work through the “lens” of the art of the intervening years has made me appreciate Picasso all the more for his innovative spirit, endless creativity and vibrant character; qualities that explode forth from nearly every work. He makes the others I see as his artistic progeny: Schnabel, Salle, Clemente look stale and even kind of timid. (The one exception is Basquiat who I think actually does have “the goods.”) Painting like they did after Picasso is the easy part; painting as he did when he did is the mystery and the magic. My friend and I kept marveling at the fact that the work was nearly 100 years old and still had such freshness and power.

The show is beautifully curated with wonderful juxtapositions of art. We loved Painter with a Palette and Easel of 1928, a supremely satisfying and subtle study of black, white, grey and pale yellow paired with the sculptural piece, Figure (submitted as a design for a monument to Guillaume Appollinaire), 1928 the bold lines in each echoing one another. Other favorite pieces are Seated Woman in Front of a Window, 1937; Self-portrait in Straw Hat, 1938 (that just knocks your socks off; the image reproduced here is a washed out shadow of the original, conveying none of its zing, but I used it because it is not often seen) and Large Still Life with Pedestal Table, 1931. And of course there’s the winsome Portrait of Olga in an Armchair painted the same year as the Synthetic Cubist Pipe, Glass and Playing Card—I love Picasso for his confidence and flexibility in daring to move back and forth between styles and doing it so brilliantly. Among other things, not wanting to be pigeon holed, he realized this kept him on pointe. With a mind as lively as his obviously was, he would have become incredibly bored plugging along in one style.

It occurred to me that it may be that some of the show-stopper pieces in the collection were donated by family members after my visit many moons ago, for surely I would have been as captivated by the paintings that grabbed me on this visit. I know for instance, I have always loved the portrait of his wife, Olga and hadn’t realized it was in the collection.

The exhibition includes photos and film footage of Picasso and it’s a delight to see this brilliant manchild at work and play. In the shop you can buy a pull marin and even a rather goofy looking Picasso doll; I wonder what the man himself would make of that?

Posted by Sarah Sargent at 3:52 PM